One of the greatest champions for Lyme and tick-borne disease patients is gone. A man of great talents and sterling character—a man with a presence. Dr. Nick Harris, founder of IGeneX Labs and an early developer of Lyme tests which undoubtedly saved the lives of hundreds of thousands of patients across the world with Lyme & tick-borne diseases. He not only gave patients hope but gave them tangible solutions for their diagnostic dilemmas.

He was a man of tremendous courage who butted heads with the self-proclaimed experts of Lyme whose agendas prevented so many from receiving a diagnosis of Lyme disease and thus subsequent treatment. Dr. Harris had no fear, and he risked his livelihood and reputation going against powerful organizations and even the government, who tried in many ways, many times early on, to shut him down due to his cutting edge Lyme testing–while working with his lab on other diseases.

He was one of a few dissenters at the 1994 Dearborn Lyme disease testing meeting where government and the Lyme denier researchers removed the 31 and 34 bands from Lyme testing—bands which treating physicians knew were essential for diagnosis of Lyme disease─ imposing a ludicrous testing standard still used today, an unbelievable 28 years later— an antiquated two tier testing regimen with “banned” bands—a disaster for those trying to receive treatment.

His dedication to helping and educating others is unparalleled. He could make complicated science clear to patients who needed to understand why they were testing negative on conventional tests yet still were sick with Lyme disease.  His generosity to Lyme patients in times of financial need and to the Lyme community and researchers in their fight to bring forth great research projects to combat the Lyme deniers is legend.

Through all of this, he was a devoted family man, and he and his wife, Aline, were a great team whose lives were enriched by children and grandchildren.  They welcomed me into their home on my Lyme travels to California after Nick picked me up from the airport and took me into the lab for a tour to see where he put science into action for patients.

He had a sense of humor too.  When he picked me up in California at the airport, he came up to me, looked up and down my suitcase several times– a suitcase almost as tall as he was– and he said with a straight face to me, “oh, you only have one suitcase?”

Dr. Harris served on the Lyme Disease Association (LDA) Scientific & Professional Advisory Board.  LDA  often worked closely with him on many  issues, especially on the formation of ILADS, and our thoughts are with his family now in this trying time. I think I can speak for all the Lyme community when I say, we miss you Nick.  I know I can speak for me and say, I lost a great and true friend.  May you rest in peace, Nick.

Dr. Nick Harris, IGeneX Labs, California, explains to an audience of 350 testing methods for Lyme disease and some of their problems at the June 2, 2010 Lyme Disease Congressional Forum in Wall Township, New Jersey hosted by Congressman Christopher Smith (NJ-4). 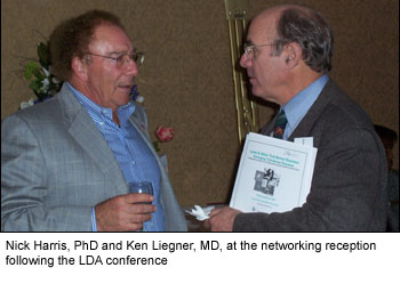 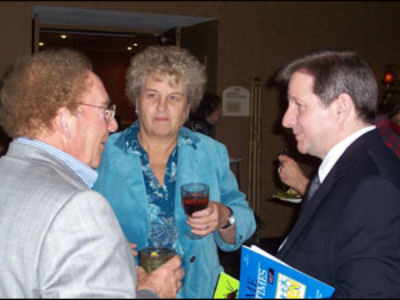