The Lyme Disease Association, Inc. (LDA) is designated by the IRS as a 501(c)(3) non-profit, a charity focusing on research, education, prevention and patient support. 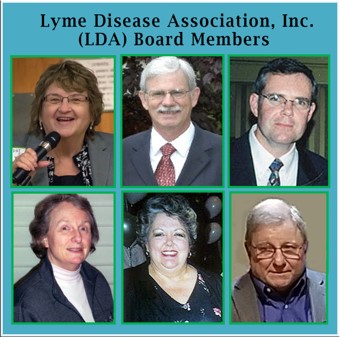 The LDA is a GuideStar Exchange Platinum participant, signifying GuideStar’s highest level of transparency. LDA has also been designated as a federally approved national charity for workplace giving in the Combined Federal Campaign. (CFC) for 15 years. Additionally, LDA is an EPA partner in its PESP program to safely eradicate tick populations and reduce the risk of pesticides and is a part of an integrated pest management tick working group with government and public members. To that end, it helped in the planning of the EPA’s prevention conference and spoke at and co-hosted a session of the conference with the Centers for Disease Control (CDC). The LDA President was also a co-author of the article produced from a network developed under EPA, Network to Reduce Lyme Disease in School Aged Children. The article “You Can Make A Difference to A Child by Reducing the Risk of Lyme Disease appeared in the May 2010 journal of the National Association of School Nurses.

123 research grants have been awarded since LDA’s inception. Genome work initially funded by LDA has shown that different strains of Borrelia have the ability to exchange genetic material among themselves, a trait greatly benefiting their survival and probably confounding the body’s ability to eradicate the organism. LDA funding of genome mapping has led to 17 strains being mapped.

In 2007, Columbia University announced the opening of the Lyme & Tick-Borne Diseases Research Center in New York, the first in the world devoted to the study of chronic Lyme disease. LDA co-funded the Center. LDA has given a grant to create a tissue bank there to store samples for Lyme disease research, now ongoing. The LDA has funded cutting edge published work with University of New Haven into the presence of Borrelia burgdorferi biofilms, which may be one of the survival mechanisms of the Lyme organism even after long-term treatment and loaned the University specialized equipment for its work.

The LDA website contains video clips of the various conferences. A few conferences have had certifications for other professionals such as social workers, psychologists, dentists, nurses. Since children ages 5-14 are at the highest risk of acquiring Lyme disease, the LDA created LymeAid 4 Kids, a fund that helps children without insurance. Initiated in conjunction with internationally acclaimed author Amy Tan, a Lyme victim, the LDA fund has awarded $419,400 in grants. LDA has compiled a website section, Lyme in the Schools, containing tools which can be accessed for free by schools, parents, and the general public. Resource articles, statistics, and an LDA educational PowerPoint, How A Tick Can Make You Sick, can be run for free in the classroom from the computer as can a prevention video for kids that the UMDNJ created in partnership with the LDA under an EPA grant. LDA’s book for children with chronic Lyme, Lyme Disease Is No Fun, Let’s Get Well! can be ordered on the site as can free pamphlet for parents and educators, The ABCs of Lyme Disease. The LDA’s extensive resource list also includes free materials (postage charge as of 2014) such as newly updated LymeR Primer, Tickmark, and Tick Card; National Case Map, Case Number graphs, Personal & Property Prevention Posters, Symptoms Lists and at cost materials including conference DVDs, and books.

The site also houses an extensive collection of tick and rash pictures and tick-borne microbes. Finding doctors who are experienced in treating tick-borne diseases is difficult, thus LDA created an automatic doctor referral system to help people nation wide. LDA has educated through public, school, corporate and government seminars. It has developed billboards including an electronic one on Times Square in 2012 featuring the spread of chronic Lyme. Annually, LDA awards education grants to many other Lyme groups, universities and other organizations to further their mission against tick-borne diseases.

159 education grants have been awarded to date. 107 educational conference scholarships to the LDA/Columbia continuing medical education conferences were awarded. LDA reps have been asked to testify in many states, and been invited to be a part of press conferences with congressmen, governors and other officials. LDA had led the charge on the introduction and passage of many pieces legislation at the federal and state levels, including the 2014 Lyme bill that passed the House, and has been successful in meeting with officials at all levels of government.

The LDA President testified before the US House of Representatives Foreign Affairs Global Health & Human Rights Subcommittee Lyme hearing in 2012 and before the US House of Representatives Energy & Commerce Health Subcommittee in 2013. LDA has been twice invited to meet with the Vector-Borne Division of the CDC in Ft. Collins, CO, to discuss the spread of tick-borne diseases and other issues. LDA led the team to negotiate the Lyme language which passed in the the 21st Century Cures Act in 2016 which creates a federal Tick-Borne Diseases Working Group which has a patient voice at the table. The LDA President was appointed a ~3 year term on the Congressionally Directed Medical Research Program panel to oversee disbursements of funds for Lyme disease research. Most recently, the LDA President was appointed as a committee member to the Federal Health and Human Services (HHS) Tick-borne Disease Working Group which presented it’s first report to Congress in November of 2018.