Tick Talk from Washington, DC & the Scoop on Companion Bills 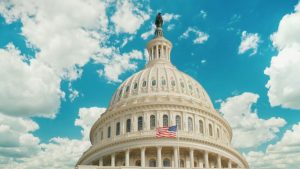 The last year has seen a flurry of activity in Washington. Here’s the scoop on the bills, briefings, and bipartisan politics.

2018 HISTORY  In the last Congress, May 2018, HR 5900, “National Lyme and Tick-Borne Diseases Control and Accountability Act of 2018’’ was introduced into the US House of Representatives by Congressman Christopher H. Smith (R-NJ). Representative Collin Peterson (D-MN) and others cosponsored the bill. The Act will establish the Office of Oversight and Coordination for Tick-Borne Diseases in the Office of the Secretary of Health & Human Services (HHS) to be headed by a director appointed by the Secretary. The bill purposes are to oversee the creation and establishment of an integrated national strategy to overcome Lyme disease and other tick-borne diseases (TBD) and to oversee and coordinate Lyme and TBD programs and activities across agencies and offices of HHS.

The objectives of the Office of Oversight & Coordination for Tick-Borne Diseases include expansion and enhancement of research; expansion and improvement of surveillance and reporting of Lyme and TBD; development of effective diagnostic tests to accurately and timely diagnose, including direct detection tests; development of treatments to cure or improve the lives of those affected with Lyme & TBD/ disorder; design and conduct clinical trials of sufficient size and duration to support clinical recommendations; development of patient registries; documentation of experiences of health care professionals in diagnosing TBD; inclusion of individuals with chronic Lyme disease in clinical, research; coordination with international bodies.

The Lyme Disease Association had significant input into development of the bill, but Congress ended before any action was taken.  Lyme & TBD Control & Accountability Act of 2018

2019 EFFORTS  Congressman Smith (R-NJ) introduced the identical bill to the above HR-5900 in the new Congress, January 3, 2019. Collin Peterson (D-MN) was onboard as lead co-sponsor of this bipartisan legislation, HR 220. The two Congressmen are co-chairs of the House Lyme Disease Caucus and have initiated many actions over time to bring help to those afflicted with Lyme and other TBD.  In 2017, Mr. Smith’s state of NJ ranked 3rd in Lyme disease case numbers (~12% of all Lyme in US) and Mr. Peterson’s state of Minnesota ranked 5th  (with ~5 ½% of cases). This bill with the same provisos as in the 2018 History above, sits idling in the House Energy & Commerce Committee. Lyme Bill HR 220

In May 2019, the Senate Committee on Aging asked me to provide a phone briefing for them on Lyme and TBD and to provide follow-up material. That Committee is chaired by Senator Susan Collins (R-ME), whose state ranks 8th in case numbers (with 4+% of all Lyme in the US). The Senator’s office also held meetings on Lyme with the Midcoast Lyme Disease Support & Education non-profit, an affiliate partner of the Lyme Disease Association, Inc.

On May 23rd, I went to Washington to provide a briefing to a packed room of House staff arranged by Congressman Chris Smith (R-NJ). CDC’s Paul Mead, Columbia’s Dr. Brian Fallon, Live Lyme Foundation’s Olivia & Holiday Goodreau also spoke. Congressman Smith opened with the seriousness of Lyme and TBDs, and his decades of frustration with his work in Congress to get Lyme legislation passed to help patients—legislation similar to other disease legislation he has gotten passed without the strenuous opposition he faced with Lyme. He then spoke about Kris Newby’s newly released book, Bitten, which credibly documents a biological warfare program in the US which focused on ticks and tick-borne diseases. He announced his efforts to have an investigation to determine what happened, how it happened, and what impact it may have had on the current Lyme and TBD situation. Tornado warning sirens ended the briefing after two hours, a long time in DC. Congressman Chris Smith Guest Blog

Simultaneous to the House briefing, Senator Susan Collins (R-ME), along with Tina Smith (D-MN), a member of the Senate Health Committee, and Senator Angus King (I-ME) an original cosponsor, introduced a bipartisan effort to improve research, prevention, diagnostics, and treatment for tick-borne diseases. The Tick Act, Ticks: Identify, Control, and Knockout (TICK) Act, S1567, is an effort to effort to improve research, prevention, diagnostics, and treatment. The Tick Act incorporates significant language from the HR 220 Smith bill above to establish an office for tick-borne diseases but broadens the scope to vector-borne diseases, which include tick-borne diseases but also mosquito and other insect-borne diseases. The bill also reauthorizes Regional Centers for Excellence in vector-borne diseases for FY2021-2026, $10M per fiscal year, as their current funding runs out in 2021. Additionally, the bill authorizes CDC grants of $20M per year to state health departments to improve collection of data, improve early diagnosis, improve treatment, and raise awareness.

On May 29, Congressman Smith hosted a Congressional Town Meeting on Lyme & TBD in Wall, NJ. Dr. Ben Beard, CDC, Dr. Richard Horowitz, and I spoke for over 3 hours to a packed room despite flash flood and tornado warnings, DC déjà vu. Press coverage of the event was great. Some individuals in positions to help are beginning to take Lyme seriously. Read More

As I traveled to DC to be sworn in for a second term as a public member representing patients on the Health & Human Services Tick-Borne Disease Working Group on June 3, 4, Representative Christopher Smith (R-NJ), with lead co-sponsor Representative Collin Peterson (D-MN) was introducing a companion bill, the identical House version of the Tick Act, HR3073, into the House of Representatives. It was referred to the House Energy & Commerce Committee. APP: ‘Tick Act’ expected to aid fight against Lyme disease

LDA POSITION  The Lyme Disease Association supports all of these bills. With the companion bills, we have to ensure whenever we can both during the process of passage and after passage that the monies will be distributed according to disease burden in the US, a proviso that LDA successfully strove to get included in the legislation.  CDC says tick-borne diseases made  up 77% of vector-borne diseases from 2004-2016. That is why we need the lion’s share of funding to go to tick-borne diseases, especially Lyme disease, with its 427,000 cases in 2017.

No tornadoes occurred during my last Working Group trip to DC; however, I picked up an unwelcome hitchhiker that “latched” on to me in DC, a tick that either decided NJ was a great place to vacation or heard that I was a danger to her kind. My 35 years working to help patients with tick-borne diseases has confirmed that we have to simultaneously deal with diagnosing and treating patients with tick-borne diseases while dealing with the perpetrators of the epidemic− to quote New York Lyme advocate Jill Auerbach, “well, it’s the ticks of course!”  Let’s help these legislators provide government with the tools necessary to make our patients well, to stop ticks, and reclaim our outdoors.