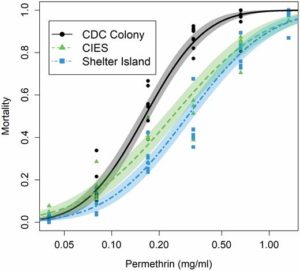 In this recent study by Burtis et al. published in the Journal of Medical Entomology, researchers assessed susceptibility of Ixodes scapularis ticks to Permethrin treatment on Shelter Island, NY where 4-poster devices have been implemented for deer topical treatment from 2008 to 2019. The 4 -poster method has effectively reduced questing tick densities, but authors question whether the resulting selection pressure is strong enough for resistance to emerge in tick populations .

The researchers compared susceptibility of I. scapularis ticks from Shelter Island with I. scapularis ticks collected from deer at the Cary Institute of Ecosystem Studies (CIES) in Millbrook, NY where no 4-poster devices are in operation and pesticides are not widely applied applied, as well as I. scapularis larvae reared from a long-term laboratory-reared colony maintained by CDC.  .

Authors suggest that Permethrin susceptibility of tick populations should be monitored from other 4-poster control areas regionally to support the development of guidelines for managing pesticide resistance in the field.