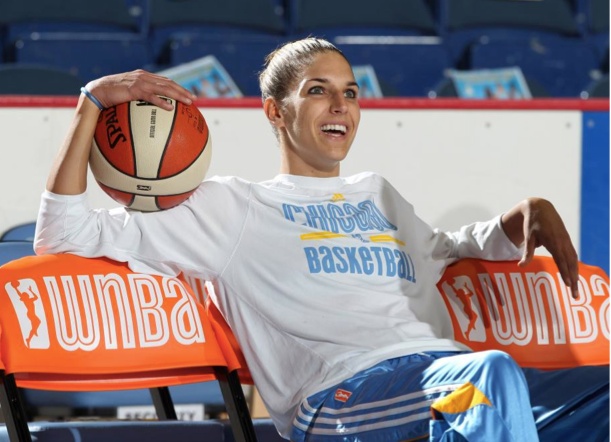 Elena Delle Donne, the reigning WNBA rookie of the year, and the Delaware 87ers, the Philadelphia 76ers’ NBA Development league affiliate, are partnering for a Lyme disease awareness night on Monday, February 10, 2014, to benefit the Lyme Disease Association’s LymeAid 4 Kids program.  The 87ers will tipoff against the Maine Red Claws at 7pm Monday at the Bob Carpenter Sports Convocation Center in Newark, Delaware, a 5,000 seat facility, which hosts the 87ers home games, but also is home for the University of Delaware’s men’s and women’s basketball teams.

The LDA is extremely pleased that both Elena and the 87ers chose to donate proceeds from the evening’s events to LymeAid 4 kids, a fund, initially established by LDA with author, Amy Tan, which provides resources to families with children without insurance coverage to help with diagnosis and treatment of Lyme and other tick-borne diseases.

Despite having Lyme disease since 2008, Elena played through the physical pain and side effects to be a consensus NCAA All-American in Delaware and to be chosen second in the 2013 WNBA draft.  After being drafted by the Chicago Sky, she was 2013 WNBA Rookie of the Year and selected to the All-Star Game as the top vote-getter in the league.

The NBA Development league (D-league) 87ers, also known as the “Sevens,”  started their inaugural season in November 2013 and joined 16 other D-league teams.  Besides being a talent pool of players, coaches, and referees for NBA teams, the D-league fosters close connections to their communities, including promoting health and wellness.

The 87ers Monday night game will be broadcast nationally on CBS Sports Network.  The 87ers will play in special lime green uniforms, which can be bid on in a silent auction to take place during the game.  Every fan will receive a special game t-shirt with a LymeAid 4 Kids logo.  A select group of lucky children will attend a basketball clinic put on by Delle Donne from 4 – 5 p.m. at her alma mater, Ursuline Academy.   In addition, a select number of fans will be given the opportunity to meet Elena during a pregame Q&A session in the Bob Carpenter Club and during a limited VIP autograph session after the game.

The LDA will have an information display table at th eevent with literature.

Join Elana and the Deleware 87ers help kids with Lyme disease get the medical attention they deserve!

All proceeds from game ticket sales, the silent auction, and the autograph session will be donated to LymeAid 4 Kids.

2013 was a banner year for Elena. She started off as a consensus NCAA All-American in Delaware and ended it as the 2013 WNBA Rookie of the Year in Chicago. In between, she was chosen second overall at the 2013 WNBA Draft, selected to the All-Star Game as the top vote-getter in the league, named Rookie of the Month four consecutive times and led the Chicago Sky to their first ever playoff appearance. From a close-knit family in Delaware, Elena chose to stay close to home for college, leading the University of Delaware to basketball success they had never experienced. She graduated as UD’s all-time leading scorer in men’s or women’s basketball and was the first Delaware player to ever be named an All-American. Elena still has a long career ahead of her with many records left to break, and if history is any indication, she is sure to surpass all of those—and then some.

Conference video replay is available thru the hub for registrants until 10/24. Click hereCME Attendees:  You must fill out your CME Survey form by October 25 in order to receive your certificate. Click for CME survey on the hub