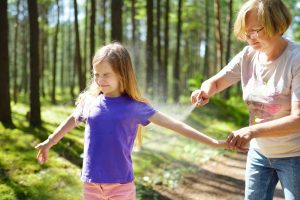 On July 20, 2020, the Environmental Protection Agency (EPA) registered a new active ingredient called nootkatone, which repels and kill ticks, mosquitoes, and other pests including bed bugs, and fleas. The Center for Disease Control (CDC) discovered and developed the new ingredient, a non-toxic chemical found in Alaska yellow cedar trees and grapefruit skin in minute amounts. Nootkatone smells and tastes like grapefruit, and is used in the fragrance industry for perfumes and food industry for flavoring. It can be used on humans and pets.

Nootkatone apparently kills bugs differently than previous classes of insecticides, including pyrethroids, organophosphates, carbamates, and cyclodienes. Since it is a new chemical — the first insecticide approved in 11 years — it can kill bugs that are resistant to currently available pesticides. It lasts on skin and clothing for several hours.

Dr. Brian Fallon, director of the Lyme and Tick-Borne Diseases Research Center at Columbia University in New York City, said of nootkatone, “I think it’s a major contribution to our arsenal of repellents.”(nbcnews.com)