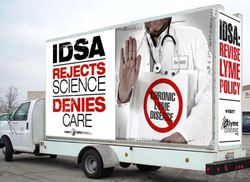 A revised complaint has been filed for the Torrey et al v. Infectious Diseases Society of America et al lawsuit initiated in 2017.  The initial lawsuit was filed on behalf of Lyme disease patients who say they have been denied care which resulted in harm under existing insurance and medical protocols.  Plaintiffs claims include injury by the IDSA, Insurance Defendants, and the IDSA Panelists “because they were forced to pay for their treatments, were forced to pay all expenses associated with treating their Lyme disease, were forced to travel long distances for treatment, were forced to try to find doctors who would treat them, and were unable to work or earn money because of their debilitating illness.”  Further, because Plaintiffs “were not timely diagnosed or treated, they now suffer long-term complications and are forced to continue to pay future medical costs for treatment and out-of-pocket expenses to receive this treatment.”

The suit was filed by 24 patients, charging six doctors (IDSA Panelists) and eight insurers with violating the Racketeer Influenced and Corrupt Organizations Act (RICO).  The defendants are the Infectious Diseases Society of America, six physicians who participated in writing the IDSA’s Lyme guidelines or assisted with enforcement of the IDSA guidelines, and the insuring companies including: Blue Cross And Blue Shield Association, Anthem, Inc., Blue Cross And Blue Shield Of Texas, Aetna Inc., Cigna Corporation, Kaiser Permanente, Inc., United Healthcare Services, Inc., and United Health Group Incorporated.  A judge previously rejected the claim of fraud under RICO in Torrey v. IDSA, but allowed the Plaintiffs (patients) to submit a new version of the suit.

The litigation is proceeding in U.S. District Court in Texarkana, Texas and a  trial is currently scheduled for June 24, 2019 before District Judge Robert W. Schroeder III.