Focus on Lyme held its 2nd Annual Wave of Change Scientific Conference & Gala on February 23-24, 2017 in Paradise Valley, AZ. Lyme Disease Association President Pat Smith was honored with the “Excellence in Advocacy” award at the conference for the work done by LDA in regards to legislation, and in particular, Lyme language in the 21st Century Cures Act. 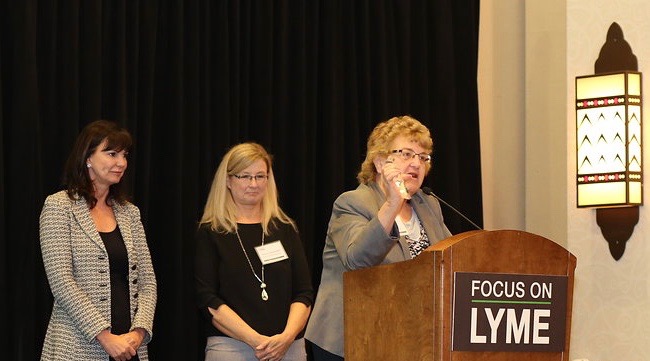 At the opening of the conference, Tammy Crawford, Executive Director, Focus on Lyme, announced the award presentation, and Holly Ahern, MS, MT (ASCP), State University New York, spoke about the legislative work of Pat Smith, President of the LDA, and a presentation Ms. Smith had made at a Forum sponsored by then Congressman Chris Gibson (NY) several years ago on how to achieve legislation and how that came into play in Pat’s subsequent work.

Accepting the award on behalf of patients, Ms. Smith addressed the conference and spoke about her family’s experiences with Lyme, Lyme disease symptoms, and the many years of Lyme disease treatment needed to make her family members better. After the event, she commented, “I thank Focus On Lyme for their advocacy award, which I accepted on behalf of patients, treating physicians, and researchers working on persistence, the people who really deserve an award. However, the thrust of the conference was on and should have been on the research we so desperately need to help the hundreds of thousands of those sick with chronic Lyme and other tick-borne diseases, and I especially thank Focus on Lyme for keeping their eye on the prize.”

Said Ms. Crawford after the event, “Focus On Lyme was so excited to honor Pat Smith for her life time of advocacy and achievement for those who suffer with Lyme disease. Pat is a true hero to us.”

In late 2016, the 21st Century Cures Act was passed by Congress and signed into law. The Cures Act includes language that requires the DHHS to convene a new working group on Tick-borne Diseases that will include stakeholders from diverse federal and non-federal scientific and medical backgrounds.

However, if it were not for the leadership and tireless efforts of Pat Smith, President of the Lyme Disease Association, that achievement would not have been won. Late in the process, the language pertaining to tick-borne disease had been pared down to nothing more than a suggestion that maybe a group should be formed.

Over the long Thanksgiving weekend, Pat and other national leaders conferenced to develop a strategy. It was Pat who pressed the appropriate Congressional offices to restore the original language, while the Lyme community stood poised to demand that it otherwise be removed.

It was only through the leadership and tireless efforts of Pat Smith that we were able to restore the language needed for creation of this federal advisory body to the Cures Act, in the wee hours before final passage of the legislation by Congress.

As a result, for the first time in the 40 year history of Lyme disease in the US, patients and advocates will have a seat at the table and a voice in the national decision-making process with regard to research and public health priorities.

About Focus On Lyme
Focus On Lyme was formed in 2015 to discover solutions in diagnostics, prevention, treatment and advocacy for Lyme disease sufferers. The best Lyme diagnostic tools that exist today are only 50 percent accurate and for those that are correctly diagnosed, there is not an accurate tool to evaluate the effectiveness of their treatment. Focus On Lyme is striving to provide immediate diagnosis and treatment to Lyme patients worldwide delivering a higher quality of life and minimal long-term effects. Focus On Lyme is sponsored by Leadership Children’s Foundation, a non-profit organization dedicated to helping children by donating money to causes that help preserve childhood and improve the quality of life for young people across the nation. For more information, visit: www.focusonlyme.org.