New Tick Species to the US Identified in NJ: Disease Threat Being Evaluated 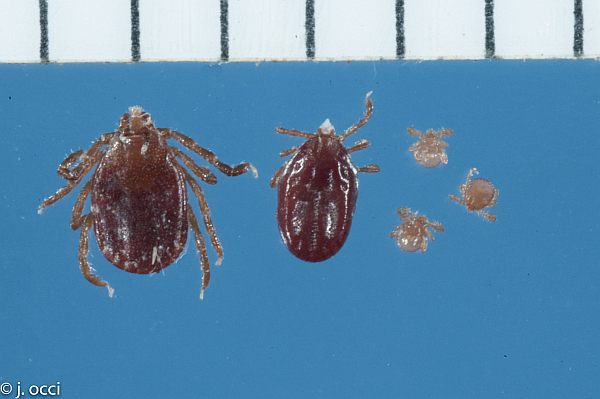 East Asian tick, also known as longhorned or bush tick Photo: James OcciThe Lyme Disease Association reports that a new tick species to the U.S. has been confirmed by the U.S. Department of Agriculture. The East Asian tick’s presence, aka longhorned or bush tick, was confirmed in Hunterdon County NJ on November 9. Initial ID was done by Rutgers and Hunterdon Co. Division of Health. The animals and property they were found on have been treated to eliminate the tick. Wildlife surveillance in the area is being done to determine if the ticks have spread beyond that area.

This tick is a serious problem for livestock, particularly in New Zealand, as well as to pets and humans. Larval and nymph stages are very small and difficult to see with the naked eye. The tick is dark brown and grows to pea size when fully engorged.

In other parts of the world, this tick has been associates with several human diseases including spotted fever rickettsiosis. Testing is being done through the Department of Agriculture to determine if the ticks just found in NJ are carrying human or animal pathogens.

The information above is from the NJ Department of Agriculture press release and they ask that “If the tick is detected in wildlife, then it should be immediately reported to the NJ Division of Fish and Wildlife, Bureau of Wildlife Management at (609) 984-6295 or the Office of Fish and Wildlife Health and Forensics at (908) 637-4173 ext. 120.”

Click here for Press Release from NJ Dept. of Agriculture