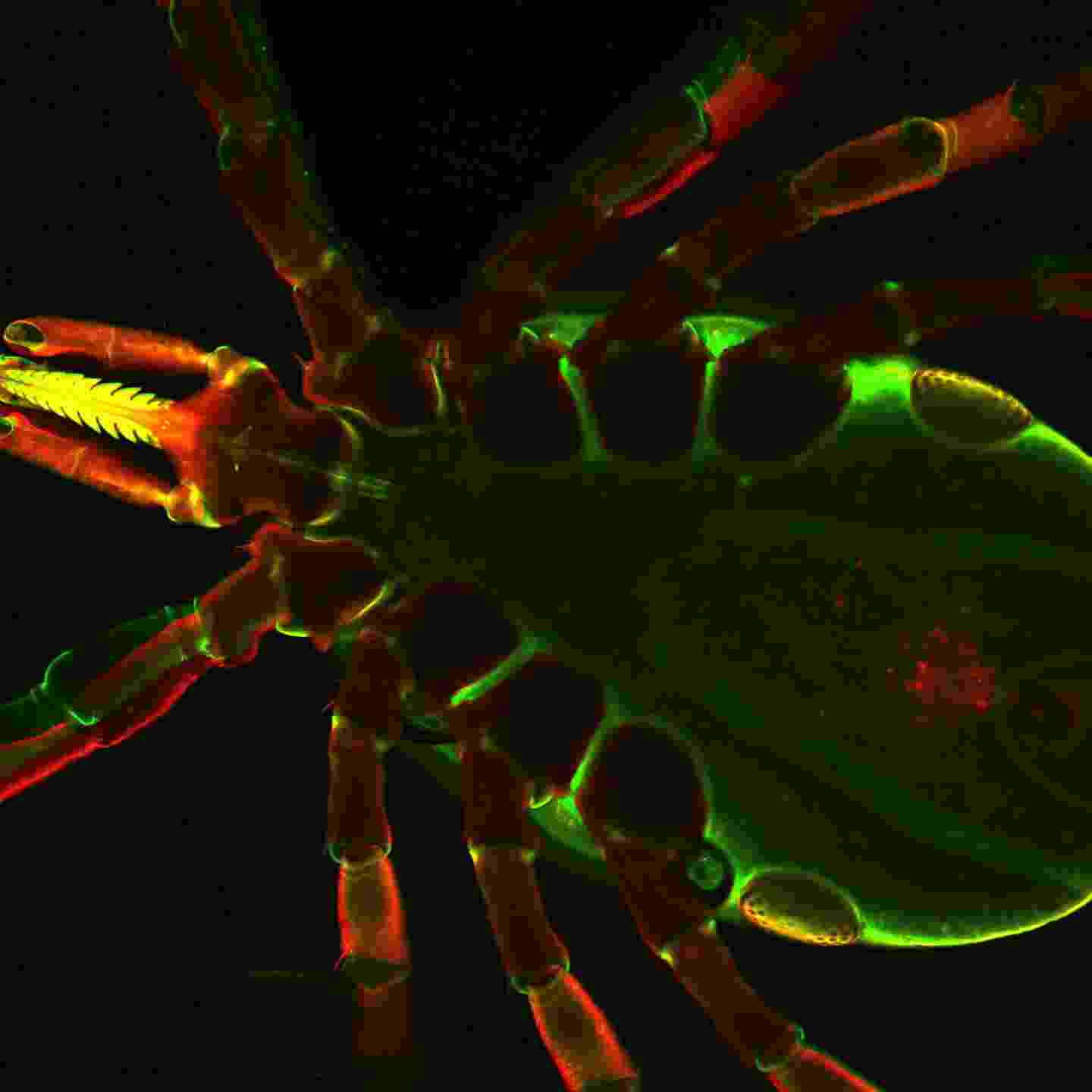 Ixodes scapularis ticks transmit the pathogens of Lyme disease, resulting in a multisystem illness in a variety of animals and humans. The image shows the bottom side of a live Ixodes tick as seen under a confocal immunofluorescence microscope. [Utpal Pal/University of Maryland] The following excerpts are from University of Maryland, Dept. of Veterinary Medicine press release:

A UMD researcher has uncovered a mechanism by which the bacteria that causes Lyme disease persists in the body and fights your early, innate immune responses. Dr. Utpal Pal, Professor in Veterinary Medicine, has been studying the Borrelia burgdorferi bacteria throughout his twelve years with UMD, and his work has already produced the protein marker used to identify this bacterial infection in the body. Now, Dr. Pal and his team have isolated a protein produced by the bacteria that disables one of the body’s first immune responses, giving insight into mechanisms that are largely not understood. He has also observed a never-before-seen phenomena demonstrating that even without this protein and with the immune system responding perfectly, the bacteria can spring back in the body weeks later.

Understanding this bacteria, which is among only a few pathogens that can actually persist in the body for long periods of time, has major implications for the treatment of tick-borne diseases like Lyme disease, which is an increasingly chronic and consistently prevalent public health issue.

“Most people don’t realize that they actually are walking around with more bacterial cells in their bodies than their own cells, so we are really bags of bacteria,” explains Pal. “Most are good, but the second your body detects something that is a pathogen and can cause disease, your immune system starts to work.” The body sends a first, nonspecific wave of attack to kill the bacteria detected that doesn’t belong. This happens within a few hours to days. If this doesn’t work, it takes seven to ten days to learn about the enemy and send a large second wave of reinforcements to kill what is left.

“Lyme disease is actually caused by your immune system,” explains Pal. “This bacteria wins the first battle, and your body overreacts so much that it causes intense inflammation in all the joints and areas that the bacteria spreads by sending so many reinforcements to kill it. Borrelia is then killed, but the inflammation remains and causes many of your symptoms for Lyme disease. That is why killing Borrelia in the first wave of immunity is so important.”

Dr. Pal’s research has shed some light on this issue and paved the way for future research and treatment options by discovering that even without the protein used to beat the first wave of immune defense, infection can reoccur in the body weeks later. “This means there is a second line of defense for Borrelia just like for our body’s immune system. This had never been observed before and gives us insight into what could be causing these chronic Lyme disease cases,” explains Pal.

Dr. Pal is frequently consulted for his expertise and has written books on this highly versatile bacteria. The federal government has recently put more emphasis on tick-borne disease research and a major public health issue with the passage of the 21st Century Cures Act. As part of this, Dr. Pal was asked to serve on a Tick-Borne Disease Working Group Subcommittee for the U.S. Department of Health & Human Services (DHHS) focused on vaccines and therapeutics for tick-borne diseases, driving future research in the field. Dr. Pal currently holds two concurrent multi-million dollar RO1 grants from the National Institutes of Health (NIH) for this work, only granted for highly important and influential research. “I am fascinated by Borrelia, and this discovery will open the door for much more work to treat and control important diseases like Lyme disease,” says Pal.

Dr. Pal’s paper, Plasticity in early immune evasion strategies of a bacterial pathogen, is published in the Proceedings of the National Academies of Science.