CDC states on its How Many People Get Lyme Disease? webpage (reviewed Jan 13, 2021), “A recently released estimate based on insurance records suggests that each year ~ 476,000 Americans are diagnosed & treated for Lyme disease.1,2  This number is likely an over-estimate of actual infections because patients are sometimes treated presumptively in medical practice. Regardless, this number indicates a large burden on the health care system and the need for more effective prevention measures.”

The CDC clearly states on its website, “It’s important to emphasize that 476,000 is the estimated number of people treated for Lyme disease and likely includes some patients who were not actually infected.”  Read the two papers below for their discussion on this new estimated number.

The two research papers on which the prior 300,000 estimate was based are:

According to a CDC official, “Unlike some tickborne disease surveillance data, the data shown in the charts [on the above webpage] are updated weekly, rather than annually. These data can indicate when people in different parts of the country might be at highest risk for tick bites. We think this is the closest we have come to providing real-time risk data for tickborne diseases ….”  CDC also indicated they are working with data providers to make this type of data state-specific verse region-specific.

Lyme Disease Association, Inc. (LDA) Response:  It is important that data surrounding Lyme and other tick-borne diseases be continuously collected and distributed to safeguard the health of the public.  Since the above material has just been released by the CDC, the LDA will review the material and comment further if necessary in the near future. 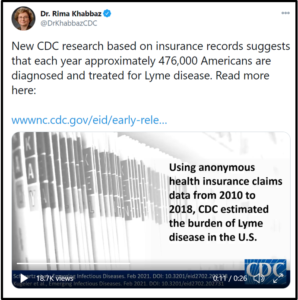 CDC Surveillance for Lyme Disease – US