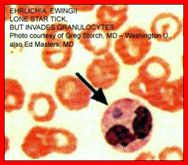 In a recent article, investigators describe multiple cases of organ transplant derived Ehrlichiosis infections in donor recipients. Two cases of ehrlichiosis were reported to the Organ Procurement and Transplantation Network (OPTN) and the Centers for Disease Control and Prevention (CDC) for investigation in 2020. These two kidney recipients from a common donor developed fatal ehrlichiosis-induced hemophagocytic lymphocytic histiocytosis (HLH). Additionally, two kidney recipients and a liver recipient from another common donor developed ehrlichiosis, and  were all treated successfully. Investigators suggest that donor-derived ehrlichiosis should be considered by clinicians when evaluating recipients with fever early after transplantation after more common causes are ruled out, and cases that are suspected for Ehrlichiosis should be reported to the organ procurement organization (OPO) and the OPTN for further investigation.