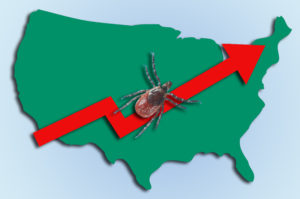 A study by FAIR Health has just been released showing significant increases in Lyme disease diagnoses over the past 15 years in both rural and urban areas. Results of the study indicate that from 2007 to 2021, private insurance claim lines with Lyme disease diagnoses increased by 357% in rural areas and 65% in urban areas. FAIR Health has released a comprehensive infographic that depicts these and other outcomes of the study.

A review of the year 2017 showed that states with the highest share of Lyme disease claim lines, as a percentage of all diagnoses in the state, from those with the most to those with the fewest, were New Jersey, Connecticut, North Carolina, Rhode Island, and Vermont. North Carolina’s ranking as having the third highest percentage of Lyme disease claim lines in 2017 showed a marked expansion to a new region since, previously, Lyme was primarily associated with the Northeast and upper Midwest. However, by 2021, the claim line numbers in North Carolina had decreased and the state fell from the list.

In 2021, the top states, from those with the highest rates to those with the lowest, were New Jersey, Vermont, Maine, Rhode Island, and Connecticut. Maine had not previously been on the list of the top five states for Lyme disease claim lines, but in 2021 rose to a third-place ranking, suggesting that there is an increasing incidence of the tick-borne bacterial illness in the state. As well, Connecticut and Vermont traded places, with Vermont rising to a number two position and Connecticut falling to the fifth ranking.

Regarding late-stage diagnoses of Lyme disease, FAIR Health analyzed an important demographic of individuals in its database of private insurance claims from 2017 to 2021, assessing the occurrence of certain diagnoses among Lyme patients in comparison to all patients in the group. They found that diagnoses such as malaise, fatigue, and soft-tissue-related ailments were more frequent among Lyme patients than the total population of patients. When evaluating all age groups in the cohort, it was found that patients with Lyme disease were more likely to have these related diagnoses than all other patients.

FAIR Health is a national, independent organization, and used its database of over 36 billion privately billed medical claims to carry out this 15-year study. This recent investigation is a continuation of a previous FAIR Health infographic that examined a decades’ worth of Lyme disease data.

Read more about Lyme disease statistics in the US.