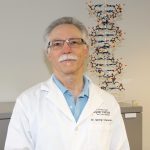 An inside look at the life of a pathogen: Intravital imaging to study hematogenous dissemination of the Lyme disease spirochete

George Chaconas obtained his Ph.D. in the Division of Medical Biochemistry at the University of Calgary in Alberta, Canada and did postdoctoral work Cold Spring Harbor Laboratory in New York. He subsequently took a faculty position in the Department of Biochemistry at the University of Western Ontario. His laboratory focused on the molecular mechanism of DNA transposition or “how jumping genes jump”. In 1999-2000, with the help of a Guggenheim Fellowship, Dr. Chaconas’ research interests took a turn through a sabbatical at the NIH Rocky Mountain Labs in Montana where he began working on the Lyme disease pathogen Borrelia burgdorferi. In 2002 he took a position in the Department of Biochemistry & Molecular Biology and the Department of Microbiology, Immunology & Infectious Diseases at the University of Calgary in Alberta,Canada where he is currently Professor in the Snyder Institute for Chronic Diseases. He held the Canada Research Chair in the Molecular Biology of Lyme Borreliosis from 2003-2017. Work in his laboratory is focused on Borrelia burgdorferi, the spirochete causing Lyme disease. His research includes studies on a variety of processes in this organism including, telomere resolution, antigenic variation, genome dynamics, regulation of global gene expression, intravital microscopy to study B. burgdorferi dissemination in a living host and metabolomics approaches for Lyme disease diagnosis.

One of the salient features of Lyme borreliosis that makes diagnosis difficult is the multitude of symptoms that can result from the disease. The wide variety of disease manifestations is a consequence of the ability of the spirochete (Borrelia burgdorferi in North America) to disseminate to many locations within the body and to promote pathogenic processes at multiple sites. The disease process starts by inoculation in the skin through the bite of an infected hard-shelled tick (Ixodes species). The first stage of the disease is a localized infection in the skin. The next stage, early disseminated disease, results from invasion of the vasculature by the spirochetes. During this stage B. burgdorferi gets a free ride throughout the body. Finally, when spirochetes exit the bloodstream at an assortment of locations, they can cause a wide variety of physical problems and symptoms. The process by which B. burgdorferi departs from the vasculature into surrounding tissue remains largely unknown and is a focus of studies in my laboratory. This is a complex, multistage procedure that we study using intravital microscopy, a methodology that allows us to see live spirochetes at work in a living mouse, in real time, using spinning disk laser confocal microscopy. The early stages of escape require that a spirochete slows its wild ride in the bloodstream, which is like an ant being swept in a stream of water in a garden hose. This occurs through physical interactions with the endothelium that are mediated by adhesins on the spirochete, proteins that that function like Velcro. The spirochetes also promote changes in the blood vessels which allow them to escape to the other side through an as yet uncharacterized mechanism. Intravital videos and data will be presented describing processes involved in both vascular interactions and vascular escape.