Adaeze Izuogu is a biomedical research scientist with over 6 years of bench work experience in the study of infectious diseases. She currently works as a postdoctoral research fellow at the University of Toledo investigating the innate immune responses to Flaviviruses in reservoir host species. Adaeze completed her doctoral training in medical microbiology and immunology at the University of Toledo after receiving a bachelor’s degree in Microbiology at Covenant University Nigeria. While in Nigeria, she worked in the public health laboratory sector where she contributed to HIV/AIDS management and diagnosis of other endemic diseases. Her scientific progress has been recognized on various platforms through honors, awards, and publication of scholarly articles. In her spare time, she is a photographer and sings in a choir.

Abstract: Tick-borne flaviviruses (TBFVs), including Powassan virus and tick-borne encephalitis virus cause encephalitis or hemorrhagic fevers in humans with case-fatality rates ranging from 1-30%. Despite severe disease in humans, TBFV infection of natural rodent hosts has little noticeable effect. Currently, the basis for resistance to disease is not known. We hypothesize that the coevolution of flaviviruses with their respective hosts has shaped the evolution of potent antiviral factors that suppress virus replication and protect the host from lethal infection. In the current study, we compared virus infection between reservoir host cells and related susceptible species. Infection of primary fibroblasts from the white-footed mouse (Peromyscus leucopus, a representative host) with a panel of vector-borne flaviviruses showed up to a 10,000-fold reduction in virus titer compared to control Mus musculus cells. Replication of vesicular stomatitis virus was equivalent in P. leucopus and M. musculus cells suggesting that restriction was flavivirus-specific. Step-wise comparison of the virus infection cycle revealed a significant block to viral RNA replication, but not virus entry, in P. leucopus cells. To understand the role of the type I interferon (IFN) response in virus restriction, we knocked down signal transducer and activator of transcription 1 (STAT1) or the type 1 IFN receptor (IFNAR1) by RNA interference. Loss of IFNAR1 or STAT1 significantly relieved the block in virus replication in P. leucopus cells. The major IFN antagonist encoded by TBFV, nonstructural protein 5, was functional in P. leucopus cells, thus ruling out ineffective viral antagonism of the host IFN response. Collectively, this work demonstrates that the IFN response of P. leucopus imparts a strong and virus-specific barrier to flavivirus replication. Future identification of the IFN-stimulated genes responsible for virus restriction specifically in P. leucopus will yield mechanistic insight into efficient control of virus replication and may inform the development of antiviral therapeutics.

Background: Graphical illustration of the study background whereby P. leucopus serves as a reservoir model for tick-borne flaviviruses. The rodent host becomes infected with viruses in the wild but does not not display any overt signs of disease rather, maintains the virus in nature. Virus particles are taken up by Ixodes ticks during a blood meal, which then transmit the viruses to humans. In certain cases, humans can succumb to infection with a wide range of symptoms, including febrile illness that may progress to life-threatening encephalitis. 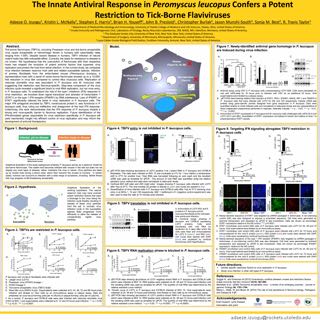