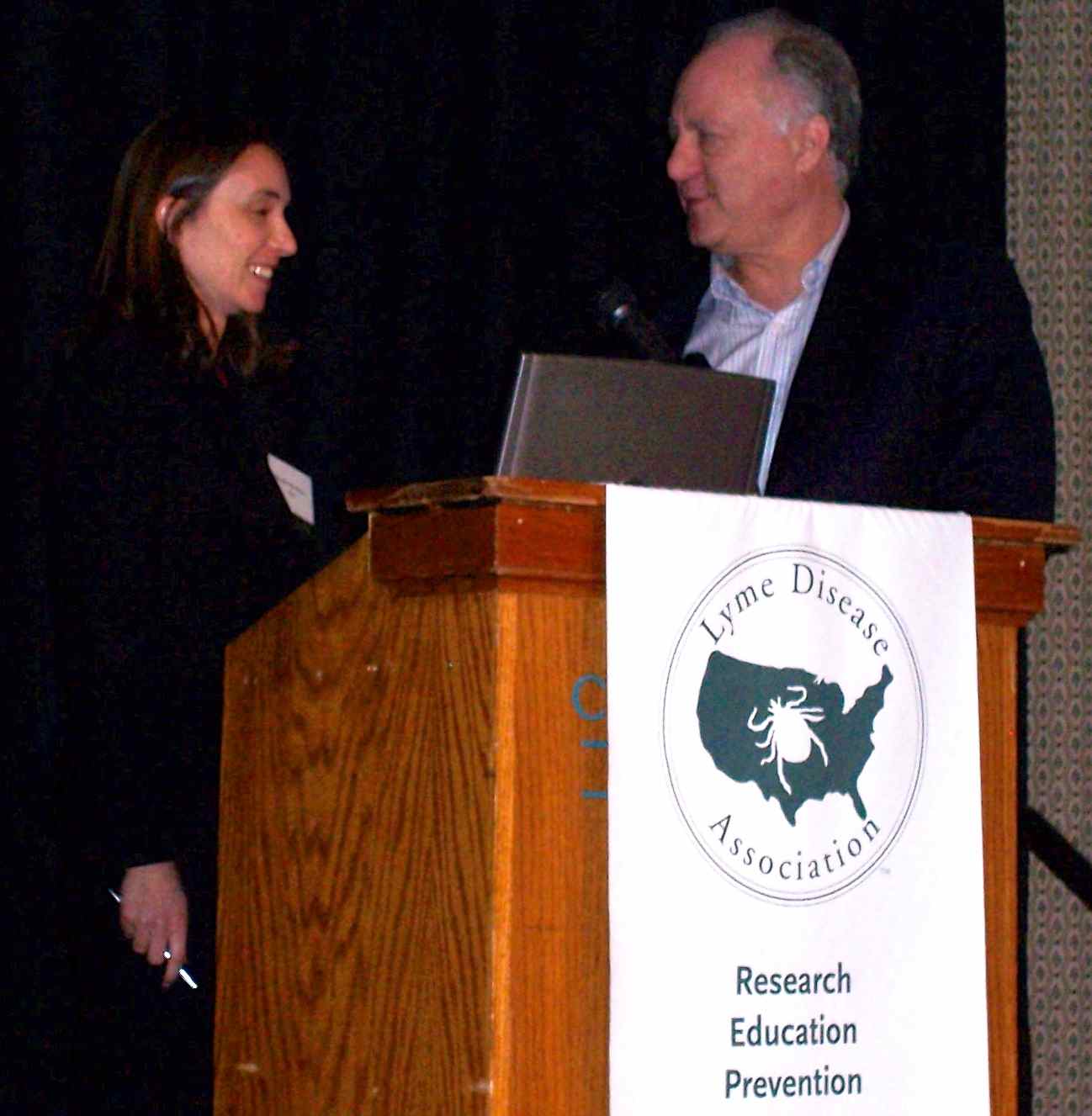 Steven Schutzer, MD speaking at 2008 LDA conference in San Francisco with Research Assistant Heather MatthewsThe national non-profit Lyme Disease Association, Inc. (LDA) awarded almost a quarter of a million dollars in new grant monies to Lyme and tick-borne diseases researchers, education groups and children who are Lyme patients in 2012. LDA is a national non-profit run by volunteers─patients and families of patients─and has been in existence more than 20 years.

Steven Schutzer, MD, (UMDNJ) and his research team continue to use cutting edge PCR technology to focus on identifying and mapping the types of organisms in ticks and correspondingly, in people. Brain Fallon, MD, and his team at the Columbia Lyme & Tick-Borne Diseases Research Center Columbia Research Center will work with Dr. Madeline Cunningham to look for specific biomarkers of Lyme and Joanna Lyon, SU, will be working at SU to look for genetic variations in the chronic Lyme populations

The Fallon study support also includes monies from the Lyme Disease Association’s Rhode Island Chapter (LDARIC). This study aims to test whether patients at various stages of Lyme disease and with varying certainty of diagnosis demonstrate specific antibodies in the serum to common CNS neuronal antigens and whether these antibodies are capable of directing activities of a certain protein in human neuronal cells. If these antibodies are present and are elevated compared to controls, their relationship to Lyme symptoms will be evaluated. The Lyon project will attempt to identify small genetic variances in individuals that may cause them to be less responsive to traditional antibiotic treatments. The Schutzer project is looking at identifying tick-borne organisms and strain variations nationwide.

In addition to research grants, the LDA also funded a number of small education grants in 2012. These grants went to a variety of groups including Lyme Association of Greater Kansas City, LymeDisease.org, Minnesota Lyme Association, S.L.A.M., Lyme Disease Association of Southeastern Pennsylvania, Maryland Lyme Info and Support, North Texas Lyme Group, and Virginia Medical Reserve Corps, and to others in California, New York and Pennsylvania. Projects ranged from a billboard, dissemination of Lyme informational packets to schools and packets to public in rural areas, book and journal publications, and website and prevention activities. The LDA also funded 11 grants from its LymeAid 4 Kids program for families with children without insurance coverage to help with Lyme and tick-borne diseases diagnosis and treatment.