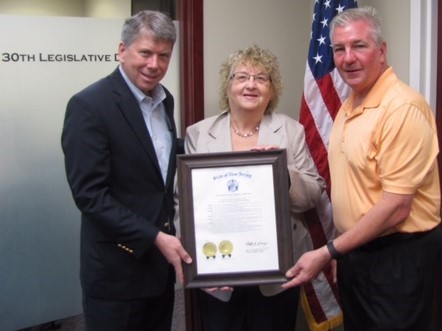 This Legislative Joint Resolution joins one the LDA received from NJ Gov. Chris Christie proclaiming May 2017 Lyme Disease Awareness Month, and one passed by the Legislature in 2008 recognizing each May as such. (L to R) Assemblyman Sean Kean, LDA Pres. Pat Smith, Assemblyman Dave RibleWall, NJ—Almost 400,000 cases of Lyme disease occur in the US annually, something recognized by Assemblymen David Rible and Sean Kean (R-30) who on May 19 presented the Lyme Disease Association, Inc. (LDA) President, Pat Smith, Wall Township, with a Joint Legislative Resolution from the NJ Senate and General Assembly introduced by them and Senator Robert Singer (R-30). In part, it states: “…Be It Resolved by the Senate and General Assembly of the State of New Jersey: That this Legislature hereby joins in the observance of Lyme Disease Awareness month during May 2017, salutes the Lyme Disease Association Inc. for its outstanding dedication and commitment, and urges all New Jerseyans to learn the prevention methods and techniques utilized in the removal of ticks;…”

According to LDA President Pat Smith: “It is important that through the efforts of Assemblymen Rible and Kean, and Senator Singer, the State Legislature of NJ recognizes the significance of Lyme disease− a State which ranks 2nd nationwide with 48,000 cases in 2015 alone, and Monmouth and Ocean Counties which rank 2nd and 5th in the State in case numbers, respectively. Despite the numbers, the public, and even some physicians, are not only unaware of the risks, especially to children ages 5-14, who are at the highest risk of acquiring Lyme, but also of the importance of proper, timely tick removal.”

Ticks should be removed immediately, as tick-borne diseases, including Lyme, can be transmitted in hours and sometimes, as with Powassan virus, in minutes. Proper removal means grasping with pointed tweezers as close to the head end of the tick as possible and pulling the tick straight out. Do not twist the tick, do not squeeze the body of the tick, do not put any substance onto the tick. Doing any of those things can cause the tick to regurgitate whatever organisms it has inside into you, greatly increasing the risk of infection. Put antiseptic on the bite site, wash your hands, and do not touch the tick. For tick disposal, wrap the tick in tape. To save the tick for testing, put it into a sealable plastic bag. Call your physician. 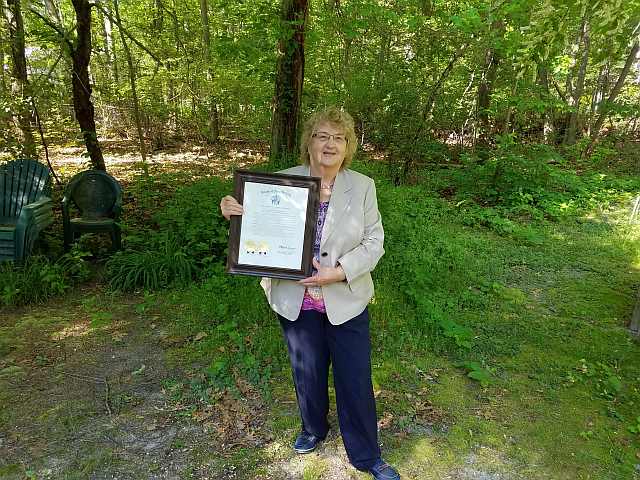 “I commend Assemblymen Dave Rible and Sean Kean for their leadership on this much needed legislation—which empowers people to mitigate their risk and get a quick and accurate diagnosis if infected. Lyme disease can no longer be ignored—the time to act is now,” said Rep. Chris Smith (NJ-04). “We are all grateful to Lyme Disease Association President Pat Smith for her tireless efforts to ensure that local and federal officials—as well as the medical community—more effectively combat Lyme disease.”

The public also needs to recognize that one tick bite from the blacklegged/deer tick (Ixodes scapularis) can cause more than one disease, including anaplasmosis, babesiosis, ehrlichiosis, bartonelliosis, tick paralysis, and Powassan virus. Powassan does not occur frequently, but case numbers are on the rise. It is dangerous, since there is no treatment except palliative care, it has a 10-15% fatality rate, and 50% of those who recover are left with neurologic damage.

It is also very important to note that other ticks in NJ, particularly the lone star tick (Amblyomma americanum) and the American dog tick (Dermacentor variabilis), transmit a number of diseases. The lone star transmits diseases including STARI, a Lyme like illness; ehrlichiosis; and tick paralysis, a paralysis that begins at the feet and moves upward and can only be stopped by removal of the attached tick. The lone star tick bite can cause a dangerous allergy to red meat, which can cause anaphylactic shock, and some physicians may not be aware of a tick bite as the cause. The American dog tick transmits diseases including Rocky Mountain spotted fever and also tick paralysis. Any tick bite needs to be taken seriously.

The LDA’s website, www.LymeDiseaseAssociation.org, has more information on tick removal, symptoms of tick-borne diseases, and a free downloadable .pdf of its LymeR Primer and Tick Identification Card and on ordering of LDA brochures in quantity for cost of postage, and much more information on Lyme disease and other TBD.