A press conference was held at the Wall Township Municipal Complex hosted by Congressman Christopher Smith (R-NJ). The Congressman highlighted information on the “NIH Strategic Plan for Tick-Borne Disease Research,” as well as “The Tick Act,” a bipartisan effort to improve research, prevention, diagnostics, and treatment for tick-borne diseases.

The bill H.R.3073, was introduced in the House of Representatives by Rep. Smith and Rep. Collin C. Peterson (D-MN). The Senate version S.1657, was introduced by Susan Collins (R-ME), Tina Smith (D-MN) and Angus King (I-ME). In addition, President Trump has asked his cabinet to do all they can to assist in helping those affected by Lyme and tick-borne diseases.

(Images and video are the sole property of the LDA and may not be used without express written permission of the LDA.) 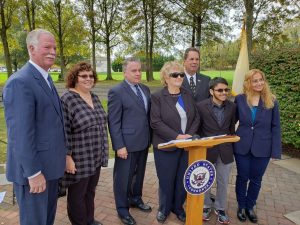 Tap into Middletown:
Ticked off: Congressman Chris Smith Perseveres in the fight against Lyme disease