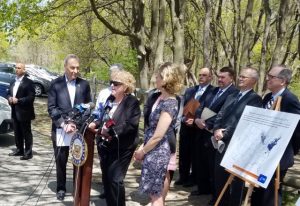 US Senator Chuck Schumer (NY) , Senate Minority Leader, invited LDA President Pat Smith to speak at a press conference he hosted in Woodbury, NY on May 2, 2018. The focus of the conference was to ensure that government monies on Lyme and tick-borne diseases reach those officials at the state and local level who can best ensure the monies are used to help fight tick-borne diseases.

Before I begin, I need to say that although I am a public member (one of 7) of the 14 member Tick-Borne Disease Working Group under HHS in DC, I am not speaking today on behalf of the Working Group but as President of the national non-profit Lyme Disease Association, Inc.

Lyme, the most prevalent vector-borne disease in the US, is found in over 80 countries worldwide. CDC indicates that only 10% of Lyme cases are reported, thus in 2016 alone, 360,000+ new cases of Lyme disease probably occurred in the US.

Information reported by CDC yesterday indicates over a 13 year period:
• Reported cases of tick-borne diseases (TBD) more than doubled—(2004 to 2016),
• TBD made up 77% of all vector-borne disease reports,
• Lyme disease made up 82% of all TBD case reports,
• NYS is in the top 20% of states in disease cases reported from ticks.

The range of ticks is spreading nationwide, and they now carry a whole host of TBDs which can complicate diagnosis and treatment. Many of us in the Northeast have noted a year round threat as the ticks become active and search for a blood meal when temperatures rise above freezing. Right here on Long Island, 3 main ticks are instrumental in causing diseases in humans, and one tick bite can produce a multitude of diseases.

• Waiting on low lying vegetation for you to brush by, the deer tick may bite and infect you with Lyme, Borrelia miyamotoi, babesiosis, anaplasmosis, maybe even Powassan virus, which has no known treatment, a 10% fatality rate, and serious neurologic complications for half its survivors.

• Going after you more aggressively, the lone star tick may bite and infect you with Lyme-like STARI, which has no known cause or available test; or ehrlichiosis, tick paralysis and even alpha gal allergy that causes serious allergic reaction to red meat, which you may then need to remove from your diet.

• Often minimized in tick education, the American dog tick may give you ehrlichiosis, RMSF, tularemia, and perhaps tick paralysis.

The deer tick, which can be as small as a poppyseed, is hard to see and hard to properly remove once it bites you. It has fish hook like barbs and it secretes a cement like substance to glue itself onto you and blood thinners to help it feed, and it can inject all the organisms inside it into you if you squeeze its body while removing it. This tiny tick can transmit a bacterium that wreaks untold havoc: dozens of doctors, years of treatment, lost income, piles of unpaid medical bills, and lost months/years of school time, since our children are at some of the highest risk of getting Lyme disease. Research studies indicate 15-34% or more of Lyme patients may become chronic.

Lyme is serious. It can enter the central nervous system within hours of a tick bite. It can hide in the skin & joints, evade the immune system, and change into forms not eradicated by conventional antibiotics. It can cross the placenta to the fetus, and it can cause sudden death in patients due to cardiac involvement. Lyme can attack every system in the body and can mimic many other conditions including MS, ALS, Chronic Fatigue, Fibromyalgia, Parkinson’s, Alzheimer’s, and even an autism-like condition, reversed with treatment.

Research and education against tick-borne diseases require a monetary commitment commensurate with the severity of Lyme and the growing number of TBDs in the US, currently about 20 diseases. The federal government needs to step up to the plate and provide monies for Lyme & tick-borne diseases in congressional appropriations.

Remember, Lyme disease does not discriminate, nor does it confer immunity—another bite, another possible infection. It does not require any risky behavior beyond walking the dog, jogging, playing on the backyard swingset or birdwatching in this beautiful natural environment. The only thing standing between us and Lyme disease is the power of significant new monies to unlock the secrets of these insidious tick-borne diseases and to curb the spread of the ticks now threatening us, our families and our pets. Thank you, Senator Schumer, for continuing to be a leader in Washington in this battle to provide monies and to ensure those monies reach the state and local levels to make families safe here on LI, in NYS, and across the nation from the growing threat of TBDs.  After 44 years of Lyme disease we still do not have a gold standard and we don’t have a test to check for active infection and this is a disgrace and we all need to work together in order to ensure this money get to the people in the trenches who best know how to use the money. 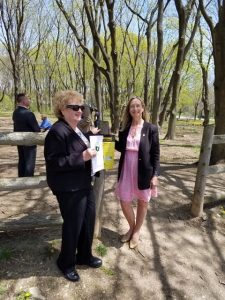