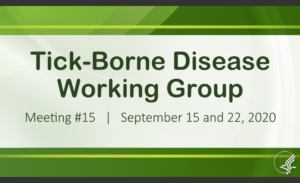 The recent 2-day virtual meeting of the Federal Tick-Borne Disease Working Group (WG) on Day 1 was more subdued than prior meetings , but Day 2 again brought forth an effort to minimize the patient access to care chapter and chronic Lyme.

Day 1 September 15, 2020
Patients and patient advocates delivered verbal comments, including advocate Carl Tuttle, who asked Pat Smith “to hold Shapiro’s feet to the fire” in regard to persistent Lyme and patient advocate  Lucy Barnes, who stated “patients are fighting for their lives” and “you know better.” Erin Walker, wife of PGA tour winner Jimmy Walker, a Lyme patient, emphatically expressed the need for better testing and better treatment as Lyme is a “real disease that affects real Americans.” Problems with patient access to care was a common theme in the verbal comments.

WG member Angel Davey presented a report from the Public Comments Subcommittee, which summarizes incoming public comments: priority areas/key themes. Of note were the number of comments received in June and July 2020 after the June 8th meeting of the WG. Recurrent themes of these comments included

Chapter 8: Epidemiology and Surveillance Review.
In the discussion of this chapter, Pat Smith again reiterates that recommendations posted on the CDC guidelines webpage only addresses acute Lyme, and that this is the only guidance available to physicians and patients seeking resources. This chapter contains the minority report addressing “Effect of Geographic Restrictions on Lyme Diagnosis,” which specifies why the “diagnosis by geography” proviso should not have been removed from the WG report as a recommendation to Congress. The original recommendation which was in the patient access chapter was “CDC provide input to the Council of State & Territorial Epidemiologists, CSTE, that the Lyme disease surveillance case definition be revised such that it abandons the use of geographic parameters for the diagnosis of Lyme disease and inform clinicians and the public that Lyme disease has been reported in all states.”

On the topic of non-tick-bite transmission, Pat vehemently disagreed with Sam Donta that modes such as “other insect vectors” be dropped from discussion stating that more research is needed on possible insect-borne transmission, since research has shown mosquitoes can carry the Lyme bacteria, and that ”the whole process has been subverted to begin with.”

Day 1 concluded with reviews of Chapters 1: “Background,” Chapter 2: “Methods,” and the Table of Contents and Title Page. Further review of the suggestions will be considered at another meeting.

After a lengthy discussion, a decision was made to include a separate chapter in the report to congress on Public Comments.

Day 2-September 22, 2020
Day 2 of meeting 15 resumed Sept. 22, beginning with reviews of Chapter 3: “Tick Biology, Ecology, and Control,” presented by CDC’s Dr. Ben Beard. Of note was that two times as many TBDs have been discovered in the past 60 years than the previous 60 years.

Chapter 4: Clinical Manifestations, Diagnosis, and Diagnostic Review: was presented by Dr. Sam Donta.  Immediately, there was a replay of the June 8 meeting with further disagreement regarding the word “likely” versus “possibly.” Dr. David Walker stated “likely as too strong a word” regarding the hypothesis that the effects of persisting organisms are the source of ongoing symptoms in patients with unresolved Lyme disease. After much discussion and disagreement regarding persistence, the WG agreed that a statement such as “Evidence continues to be gathered that supports that persistent infection plays a role” may be an acceptable solution, and wording will be revisited by the co-leads of this chapter.

Convergent views and difference of opinion continued into Chapter 5 review: “Causes, Pathogenesis, and Pathophysiological,” where disagreements arose about TBD ability to suppress, subvert or modulate immune system in humans and effects to response to treatment and increase risk of developing other infections. Dr. Walker stated that “this speculation requires a reference. I do not know of any supportive evidence.” Although Angel Davey cited references on human effects, arguments over the validity of animal studies to translate to human effects continued. It was agreed that further studies are needed.

Chapter 6: Treatment Options and Strategies Review: was presented by Dr. Sam Donta and Dennis Dixon, NIH. When discussing Rickettsial diseases, Pat Smith requested that the stated fatality rate of 20% be cited and/or updated with current numbers. Dr. Walker argued that this statement was in regard to untreated infections, however Pat argued that these numbers are being quoted from 1940’s and 1950’s studies, and that current citations are needed.  Ben agreed to update with more timely and relevant data, especially bringing forth regional outbreaks in Arizona, which have higher numbers. Pat then said great, we can then include numbers from Lyme in high case areas.

Chapter 7: Clinician and Public Education, Patient Access to Care Review: was presented by Pat Smith and captain Scott Cooper,  PA, the latter went down the previously addressed (online) comments one by one explaining the changes he and Ms. Smith had made.   Drs. David Walker and Eugene Shapiro surfaced on the topic of “persistent Lyme.” This chapter review was again the longest and most contentious of all chapters discussed. Walker started off by disputing the patient percentage numbers that describe chronic and often debilitating symptoms. He believes the cited 35% to be too high and inconsistent with numbers used previously in the report. Walkers comments on the sidebar of the report continue to argue that ”persistent/chronic Lyme disease is an unproven hypothesis, and accused Pat Smith of using this chapter to address ”the author’s pet topics.”  She explained that these numbers were generated from a study conducted by Dr. John Aucott, Johns Hopkins University. Shapiro went on to discredit the Aucott study arguing the validity of the patient cohort, to which Smith responded that the patient cohort was comprised of all EM rash patients. Ultimately, it was agreed that Captain Cooper and Ms. Smith would revise and include a range of percentages from various Lyme patient studies with chronic or persistent symptoms.

However, Shapiro continued his attack of the topic of “persistent Lyme disease” while attempting to discredit the use of the largest patient registry, MyLymeData with comments written on the sidebar of the report stating ”This is mostly propaganda and typically based on self-reports with no confirmation that the patients have Lyme disease.” In regard to the data presented where “67% (of patients) report that they have postponed or avoided medical treatment due to discrimination, disrespect or difficulty obtaining care, and nearly half (47%) report that they have been denied treatment.” Shapiro argued the credibility of the patient registry responding to Pat Smith, “I don’t buy it.”  She explained that NIH uses patient registries, 72 of them. Pat went on to describe that this patient registry is a rigorous one, featured in college textbooks, in collaboration with UCLA, and a registry that has resulted in citations in 4 peer reviewed studies as well as having received $800,000 in funding from the National Science Foundation.  Walker argued that “the evidence isn’t there that it really is associated with Lyme disease.”  Dennis Dixon suggested a writing a preamble to this section describing what patient registries are and how they are collected. Pat responded, “we can certainly do that, but I believe that again, we are being discriminated against…our patients…and all of the information we have about them.” She further explained “every time we present something that other people use with many, many other diseases, it’s like we have to jump through hoops in order to indicate these people are sick.”

In response to erroneously reported case numbers that were discovered in the past subcommittee report on ehrlichiosis/anaplasmosis, Smith and Cooper replaced report text with quoted material from the CDC website. Walker did not like those CDC numbers. Discussion ensued regarding reported case numbers for each of the tick-borne diseases. Ben Beard suggested to just capture the big picture rather than talking about numbers in one year or another and stated ”diseases are on the rise and no one disputes that,” so why not just state ”cases over the past 15 years have increased significantly.” The co-leads will review that for inclusion.

The disagreements continued…In regard to Walker’s and Shapiro’s comments about NIH Lyme clinical treatment trials Cooper stated ” these are long standing professional disagreements.” Shapiro said “it could be presented in a much more balanced way”. Smith responded that they had already revised and made the changes as recommended. Shapiro stated “I’ll just write something…. a minority report I guess.” Smith said, “as long as you vote against this you certainly can do that. We indicated that there was a difference of opinion…and we did that. We felt that we addressed the huge discussion that was held last meeting…we looked back and read the summaries of the meeting…and we felt that we addressed those.”  Shapiro said  “I vote no.” To which Pat responded, “you can’t vote no, there is no motion on the floor.” When asked by Dennis Dixon if there were any minor wording suggestions to take the need for minority report off the table, Shapiro stated “No, I don’t…I think it is too great a gap.”

When contrasting the differing treatment guidelines (IDSA vs ILADS), Shapiro commented, “again the authors ignore the fact that ILADS recommendations are gross outliers,” and that the authors have presented an “inaccurate, biased table” and he wants it deleted. After much discussion about the table’s contents and title, co-leads agree to revisit. Shapiro stated that he did not believe that information is being presented in a balanced way and that he will move forward with a minority report. Pat reminded Shapiro that to write the minority report, he will have to vote against the report.

On the topic of “shared decision making,” Walker proposed removal of the entire section. He stated that he “can’t see how this is relevant to this chapter.” He stated in the comments that “The authors of this chapter have departed from its intention…and that they have presented too much content on the ideas espoused by ILADS…” Walker further commented “This is an inappropriate balance. It represents a biased overemphasis on Lyme disease in the context of this chapter.” Pat Smith again championed the voice of the patients explaining why this content is not only appropriate but supports the intent of the WG.

*Slide presentations from the September 15th and 22nd meetings may be obtained by sending your request to tickbornedisease@hhs.gov.