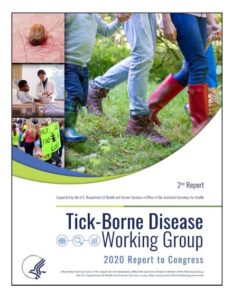 The Tick-Borne Disease Working Group 2020 Report to Congress is now available (Report). The Report was presented to the Secretary of Health & Human Services in December 2020 by the Working Group (WG). The Secretary sent the Report to the Energy & Commerce Committee in the House of Representatives and the Health, Education, Labor, and Pensions Committee in the Senate at the end of January 2021. As required, the Report is now on the HHS website click here. The above process is required by the portion of the 21st Century Cures Act that created the WG.
This second term of the WG often had contentious meetings primarily focusing on material on chronic Lyme disease (CLD) and the problems with patients who have CLD in obtaining treatment and reimbursement in Chapter 7. The federal agencies charged with healthcare do not accept CLD as an entity, thus coming to consensus was often difficult for the WG. Several Minority reports are contained within the WG report that deal with those Lyme disease patient issues, including diagnosis.
The Report has chapters which include Tick Biology, Ecology & Control; Clinical Manifestations, Diagnosis & Diagnostics; Causes, Pathogenesis & Pathophysiology; Treatment; Clinical & Public Education & Access to Care; Epidemiology & Surveillance. The report contains a significant amount of information on other tick-borne diseases.
LDA President Pat Smith served two terms as a public member of the Working Group in the  advocate/family member of patient categories as delineated in the legislation.
Other links:
2020 TBDWG Report to Congress  – PDF
2020 TBDWG Subcommittee Reports
LDA TBDWG Posts
« Johns Hopkins Lyme Research Center Challenges IDSA Guidelines & Addresses Lyme-COVID » Tick-Borne Disease Working Group Reports (2018 – 2020)