Pat Smith, President, Lyme Disease Association, Inc.
I have known and worked with Dr. Lis Heininger 10 years, and she and I became friends over that period. We shared a common bond, to understand and eradicate Lyme and other tick-borne diseases… 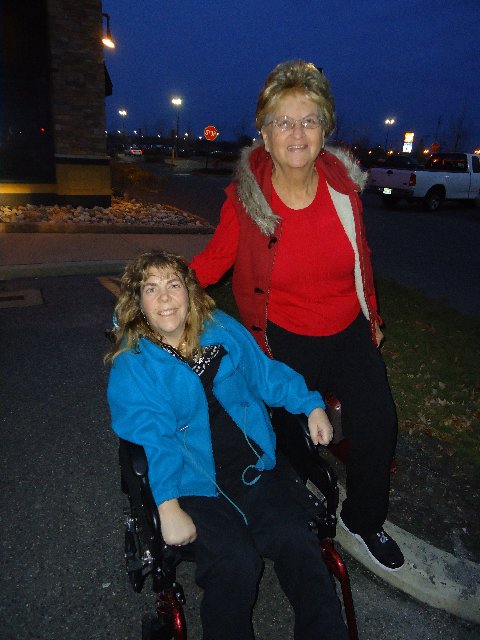 Lis Heininger, LDA Corning/Fingerlakes Chapter Chair and LDA President Pat Smith in New Jersey in 2012 heading into an informal dinner meeting on Lyme disease.I have known and worked with Dr. Lis Heininger 10 years, and she and I became friends over that period. We shared a common bond, to understand and eradicate Lyme and other tick-borne diseases, and to try to save our children, those at highest risk. Lis was robbed of half her life due to not only Lyme disease itself but the politics behind it. Misdiagnosed for many years, she was not able to get the care she needed early in the disease, thus progressed to chronic Lyme.

She contacted me and wanted to be involved with Lyme, not just tangentially, but be in the thick of things. She felt so strongly about what was happening in the Corning area with Lyme disease that she wanted to become a Lyme Disease Association (LDA) Chapter Chair. Normally, we do not take on a Chapter unless we know the person heading it well. In this case, it did not take me long to recommend to the LDA Board that we welcome Lis on board. In five minutes with Lis, one could feel her determination, could detect her principles, and respect her passion.

I have known and worked with many people over my 30 years in Lyme, but never have I met a more determined individual. Despite all the obstacles thrown at her, she never surrendered. Her will to live was always there along with her commitment to the cause. She never wanted others to experience what she had experienced, and she never wanted other families to suffer as hers had.

Some of my first presentations on Lyme in Corning were at Corning Inc., who recognized the value of educating their employees to the dangers of Lyme. Lis set up presentations for me in the area schools and arranged meetings with legislators and interviews with print media and TV. Although she came to those and may have said a few words, she always felt I needed to present the current information on tick-borne diseases; she did not have a need nor want to be front and center. I often argued she should be the focus, but it will come as no surprise to those of you who knew and loved Lis, I never won.

She was so determined to keep current on Lyme, she came to some of the LDA scientific conferences with someone to assist her throughout the conference. She had a very keen and orderly mind, and not only understood the science, but recognized the next step, sharing it with others who could help the cause.

A true educator, she never allowed not being able to walk, or move, or eventually not being able to talk very loudly, interfere with her drive to warn the world about Lyme. She continued to schedule and present Powerpoint presentations for herself with Boy Scouts and throughout the community, and when she could not perform all the functions necessary herself to present, she got someone else to go with her and do it. I marveled at her tenacity, her drive, her concern for others.

A year ago, I came up to Corning and spoke to the Rotary about Lyme disease, through the efforts of Lis and her dad. Lis came to hear the talk and to speak with me afterwards. She did talk to me about her own situation, but she also wanted to know about everything that was being done on the Lyme scene, since she could not really be online to hear what was happening. She was on a phone call with one of our LDA people just a few weeks ago hearing about the federal Lyme legislation the LDA just led the charge this summer to pass through the US House Of Representatives. She was happy about it.

Sometimes she was sad when she talked about her family, her parents, her husband, and her daughter especially. She knew this was very difficult on them and worried about it. Lis had strong family values, passed to her from her parents who supported her and embraced by her and Andy in their family life.

To me, she was a beacon of light, when I felt discouraged and thought I could not go on, I looked at what Lis was accomplishing, how she let nothing stand in her way. Elisabeth Kubler Ross said, “The most beautiful people we have known are those who have known defeat, known suffering, known struggle, known loss, and have found their way out of the depths. These persons have an appreciation, a sensitivity, and an understanding of life that fills them with compassion, gentleness, and a deep loving concern. Beautiful people do not just happen.” Lis was a beautiful person, inside and out. I personally will miss her, but I will never forget the selfless legacy she has left for her family, for me, the Lyme Disease Association, the Lyme community, and the public at large.