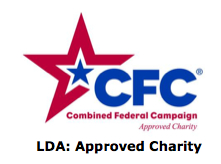 The Lyme Disease Association, Inc. LDA has been designated as a national charity included in the 2021 Combined Federal Campaign (CFC) Charity List. CFC is part of the Office of Personnel Management (OPM). Each year, federal employees are provided with lists of approved charities for their workplace giving through the CFC. The LDA has met the requirements and been a part of CFC for 16 years running. LDA’s administrative and fundraising costs were determined to be only 4.3%, meaning 95.7 % went directly to programs.

The LDA’s CFC 2021 identification for donors is #11424, and the Lyme Disease Association, Inc. will appear in the listing of National/International Independent Organizations, which is published in each local campaign charity list. See your federal employer for details. Check the CFC website at: http://www.opm.gov/cfc/ for details about the Combined Federal Campaign.