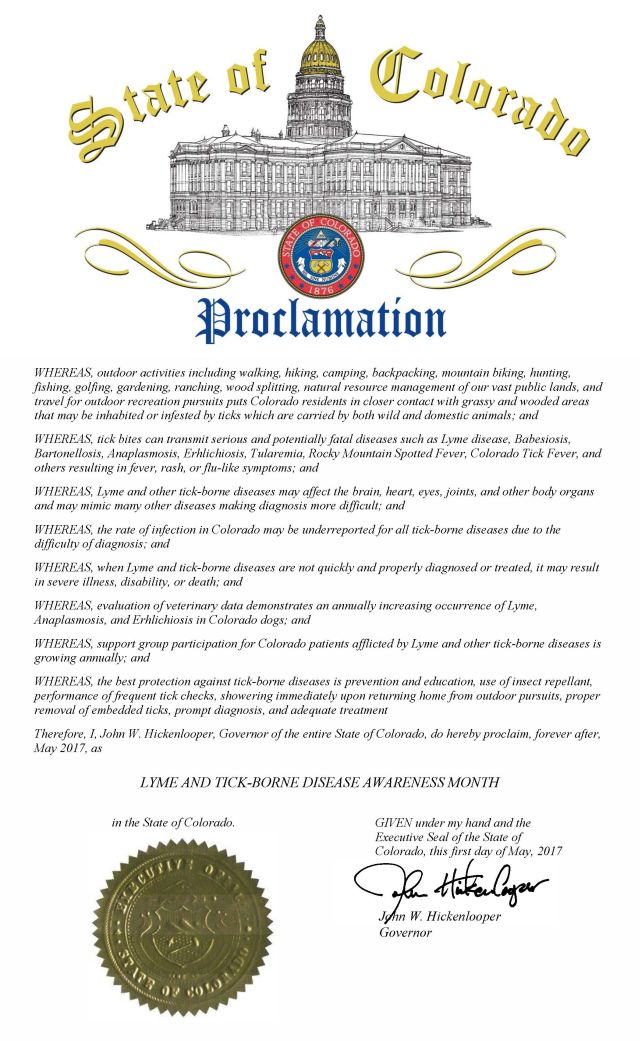 “Many of our residents and visitors are at greater risk for exposure to ticks through both work and their pursuit of outdoor adventure within Colorado and beyond. Common belief is that Lyme does not occur in Colorado. However, Lyme has been documented in both competent reservoir hosts, including the Mexican Pack rat and other small mammals, as well as in competent tick vectors,” Monica White wrote in her letter to the LDA announcing the news. White notes “a shortage of physicians within Colorado and adjacent western states with the experience necessary to recognize, diagnose and adequately treat Lyme and other tick-borne diseases.” She thanks Governor Hickenlooper for recognizing and supporting the growing need to elevate awareness of Lyme and Tick-Borne Diseases within Colorado. Click here to read letter

Says LDA President Pat Smith, “The LDA congratuates  the Colorado Tick-Borne Disease Awareness Association for their efforts to educate about tick-borne diseases in the region, an area that lacks understanding about how many diseases are now a problem, not only there, but also across the country.”  She added, “we are a mobile society, taking our families and pets all over the US. Everyone needs to understand how to protect their families and what to look for while traveling and after returning home. This proclamation will help raise that awareness. ”

Governor Hickenlooper’s proclamation acknowledges that serious health complications, sometimes fatal, can arise from Lyme and tick-borne diseases; that the rate of infection in Colorado may be underreported for all tick-borne diseases due to the difficulty of diagnosis; and that support group membership for those battling Lyme and other tick-borne Diseases is growing annually within Colorado. For all issues recognized by the Governor, read the full proclamation here.

This event made CBS Denver News: Channel 4 did in depth interviews of Dr. Dan Cameron, Immediate Past President of the International Lyme & Associated Diseases Society, and Pat Smith, President, Lyme Disease Association, Inc. CBS also aired two new video clips on Lyme in the region in July 2016, featuring a video with patients in Colorado with Lyme, and then one with LDA President Pat Smith and the Bird Banders who are collecting ticks for a study on ticks in Colorado—a study spearheaded by Biting Back and supported by the LDA.  Click here to learn more about the forum and to see news clips.