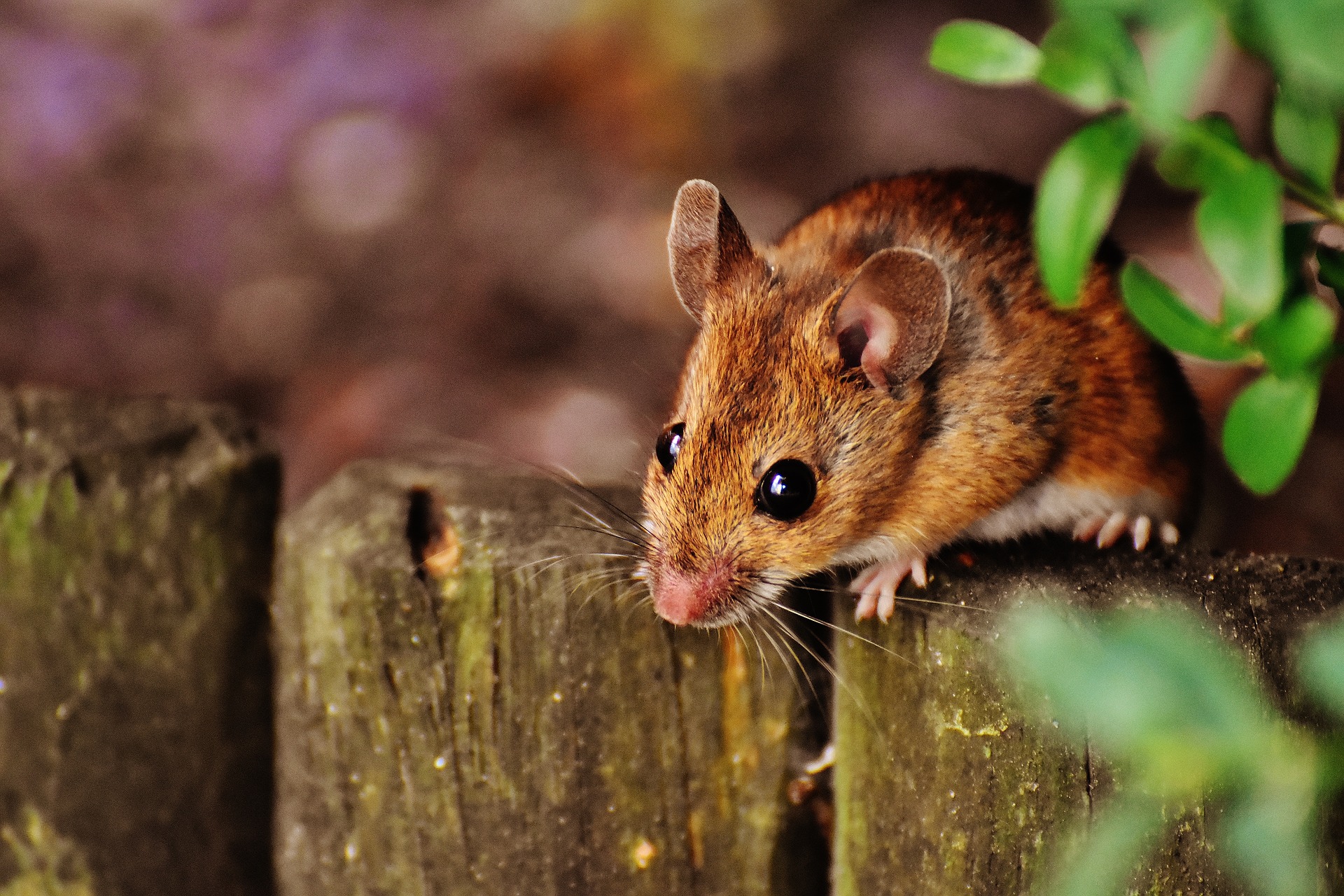 The Journal of Medical Entomology has published a recent article regarding utilization of integrated tick management (ITM). Researchers studied the effects of “configuration of bait box deployment” on the reduction of tick burden in a suburban/rural landscape. Researchers additionally investigated bait consumption and white-footed mouse (P. leucopus) abundances as a measure of the usage and effectiveness of bait boxes.

Bait boxes were placed in both grid and perimeter layouts on nine properties within each of six neighborhoods throughout Guilford, Connecticut. These properties consisted of a matrix of forested, residential, preserved open space and some agricultural lands. The investigators then analyzed multiple factors as potential predictors for reduction in tick burdens using a “backward stepwise selection procedure.”

Results of the study show that the perimeter layout was the more effective placement strategy for bait boxes. They also found that white-footed mouse abundance was a significant predictor of reduction of tick burden, but that bait consumption was not. The findings of this study support the recommended perimeter placement layout for bait boxes, and provides insight into effective utilization in areas of high white-footed mouse abundance.

Vector control professionals, homeowners and other stakeholders can utilize the results of this study to make informed decisions regarding bait box placement on properties to exert the greatest impact on blacklegged tick reduction and their associated pathogens using ITM strategies.

Access to the full text article can be found here

Borrelia burgdorferi in the Alzheimer’s Brain 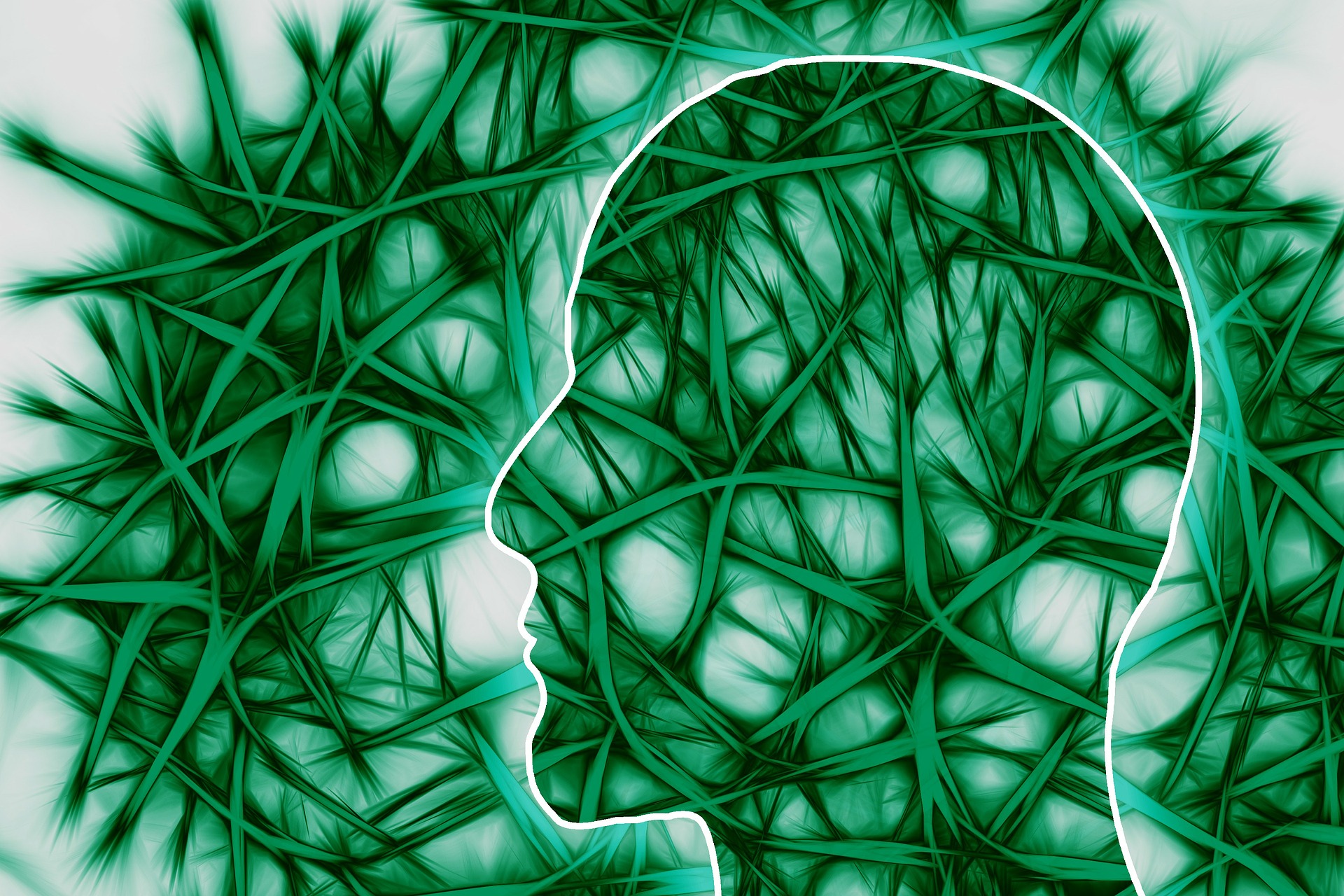 In a newly published article in the IOS Press, researchers identified the Borrelia burgdorferi spirochete, the causative agent of Lyme disease in autopsied brain tissue of patients diagnosed Alzheimer’s. In addition, they found a significant number of Borrelia-positive aggregates with a known biofilm marker, alginate. Immunohistochemical data also showed that Borrelia-positive aggregates co-localized with amyloid and anti-phospho-tau markers.

Investigators studied patients diagnosed with either Alzheimer’s or Parkinson’s diseases. They found the presence of B. burgdorferi antigen and DNA in patients with Alzheimer’s pathology. One of the brain specimens was from a person previously diagnosed with Lyme disease. Researchers additionally infected two mammalian cell lines with B. burgdorferi which resulted in a significant increase in the expression of amyloid-β and p-Tau proteins in both cells lines post-infection. This finding further supports the potential relationship of B. burgdorferi and amyloids.

Results of the study indicate that B. burgdorferi can be found in Alzheimer’s brain tissues, in spirochete, known antibiotic resistant biofilms, and co-localized amyloid markers. These findings provide evidence for a likely association between B. burgdorferi infections and biofilm formation, Alzheimer’s pathology, and chronic neurodegenerative diseases.

Additional LDA Articles on Lyme & Alzheimer’s can be found here

Most southwestern detection of Borrelia burgdorferi pathogen in the midwestern US to date.

In a recently published article, researchers present their findings of tick surveillance surveys conducted in summer of 2019. Surveys focused on the eastern counties of the state where 266 ticks were collected and 3 species were identified. Twenty two Ixodes scapularis were collected from 5 locations, confirming the established population of this species in South Dakota. Twenty one I. scapularis were tested, and Borrelia burgdorferi was detected in 2 adult ticks from two different sites. One of the ticks from Lincoln County represents the most southwestern detection of this pathogen in the midwestern US to date. The most commonly collected tick was Dermacentor variabilis (American dog tick), which was found in all counties surveyed.  In addition, 15 Amblyomma americanum (Lonestar ticks) were collected from 3 different locations providing evidence of established populations in the state for the first time. This finding also expands the known distribution range of the Lonestar tick. Authors present that although habitats in eastern South Dakota are considered “suboptimal,” results of this study indicate that both I. scapularis and A. americanum are undergoing range expansions into South Dakota. They believe that factors such as climate change and the migration of host wildlife species, such as mice and deer, from neighboring regions could all contribute to this movement, but that other factors have yet to be determined. Authors present several new findings from their study that demonstrate the need to improve monitoring for ticks and tick-borne pathogens in eastern South Dakota and the surrounding region.

Note:  This work was funded in part by a grant from the Lyme Disease Association. 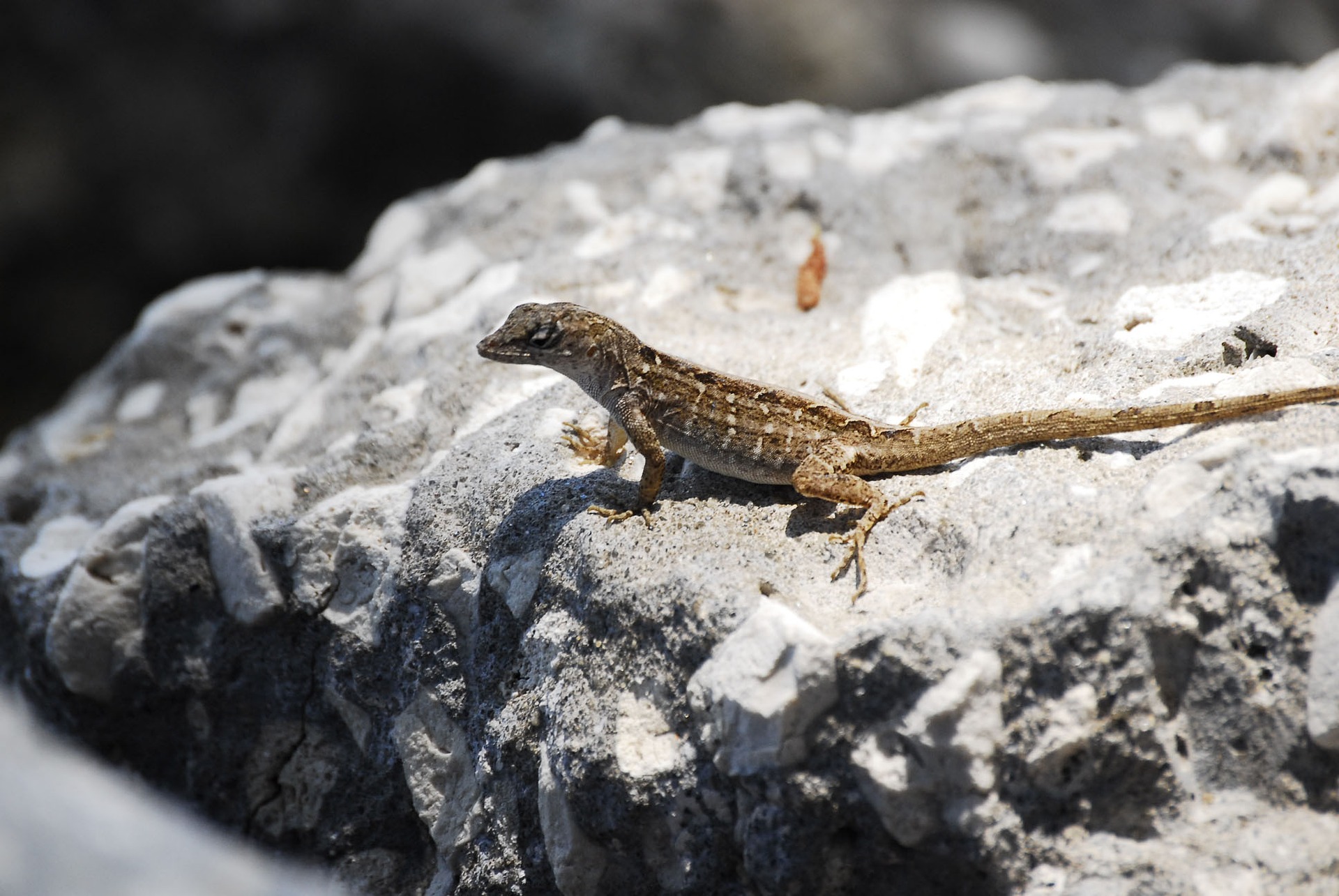 A recent article published in the Journal of Medical Entomology, describes host associations of larval and nymphal Ixodes scapularis (blacklegged ticks) collected from eight lizard species. Researchers collected from 2 to 3 sampling arrays at 5 field sites in the southeastern US, including North Carolina, Tennessee, South Carolina, Alabama, and Florida. Samples were collected at each site every third week in 2011 and 2012.

As questing behavior and host associations of immature blacklegged ticks in the NE are known to differ from ticks in the SE, researchers attempt to shed light on this observation. Findings of this study show that immature ticks (larvae and nymphs) attached in greater numbers to larger lizards than to smaller lizards. They also found different levels of attachment with different lizard species, with the highest numbers of larvae and nymphs attached to skinks of the genus Plestiodon and substantially lower numbers on anoles, fence lizards, and racerunners. There remains a question as to whether these findings are due to behavioral host preferences or if  ecological factors such as timing or microhabitat distributions of tick questing and host activity may have influence. 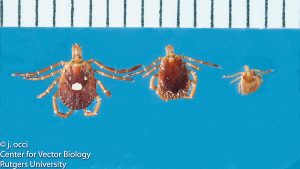 Dowling, A., et al., published a report in Journal of Medical Entomology with the results of a cooperative effort to survey ticks throughout Arkansas to better understand the heavy impacts of TBDs such as spotted fever rickettsiosis, and ehrlichiosis in the mid-south. Logistical and financial barriers, and an expanding geographic area of concern, prompted researchers to collaborate with members of the public to gather data on human disease-causing pathogens carried by ticks. The 20-month period study focused on ticks that encounter humans most often. Arkansans contributed 9,002 ticks collected from 71 of the state’s 75 counties.

The Amblyomma americanum (lone star tick) was the most commonly found– 76% of all ticks in the study. Of the ~ 6,000 screened ticks, the prevalence rate was 37.4% for Rickettsia (SFGR-spotted fever group Rickettsia) and 5.1% for Ehrlichia. One hundred forty-five ticks (2.5%), were simultaneously infected with SFGR and Ehrlichia. During the study period, Arkansas Department of Health reported 2,281 spotted fever and 380 ehrlichiosis cases.

Dermacentor variabilis (American dog tick) and Amblyomma maculatum (Gulf Coast tick) were not the most frequently submitted ticks, nor did they have the highest occurrence of SFGR. Therefore, the researchers speculate that other tick species seem to play the primary role in infecting humans with SFGR.

Read the report in Journal of Medical Entomology.

Read about other TBDs.

Mutant bacteria, bacteria that require a particular additional nutrient which the normal strain does not, have altered morphology, reduced motility, and cell envelope defects that researchers suspect result from producing peptidoglycan that is stiffer than that in wild-type bacteria.

Virginia Tech researchers discovered that the bacterium that causes Lyme disease has a highly unusual modification in its protective molecular bag—its peptidoglycan, which is common to all bacteria. Researchers conducted LCMS, liquid chromatography coupled with mass spectroscopy to determine that chitobiose was the actual sugar. They also conducted Nuclear Magnetic Resonance and metabolic labeling studies with C13 labeled sugars to confirm this finding. They additionally determined why this modification is found in Borrelia—it allows for elasticity which supports effective motility of the bacteria to move through tissue and cartilage. Without this modification, motility is impeded.

Researchers provide evidence for this model, demonstrating that bacteria that are unable to bring in chitobiose to the cells have reduced amounts of peptidoglycan, as well as altered peptidoglycan composition, which results in abnormalities in bacterial cell form and structure.

The significance of these findings is that disrupting the balance between flagellar motion and peptidoglycan structure impairs motility, which hinders bacterial movement. This finding could potentially shed light on understanding what causes symptoms and illness in humans, as well as identifying potential diagnostic and treatment strategies that target Borrelia spirochetes. 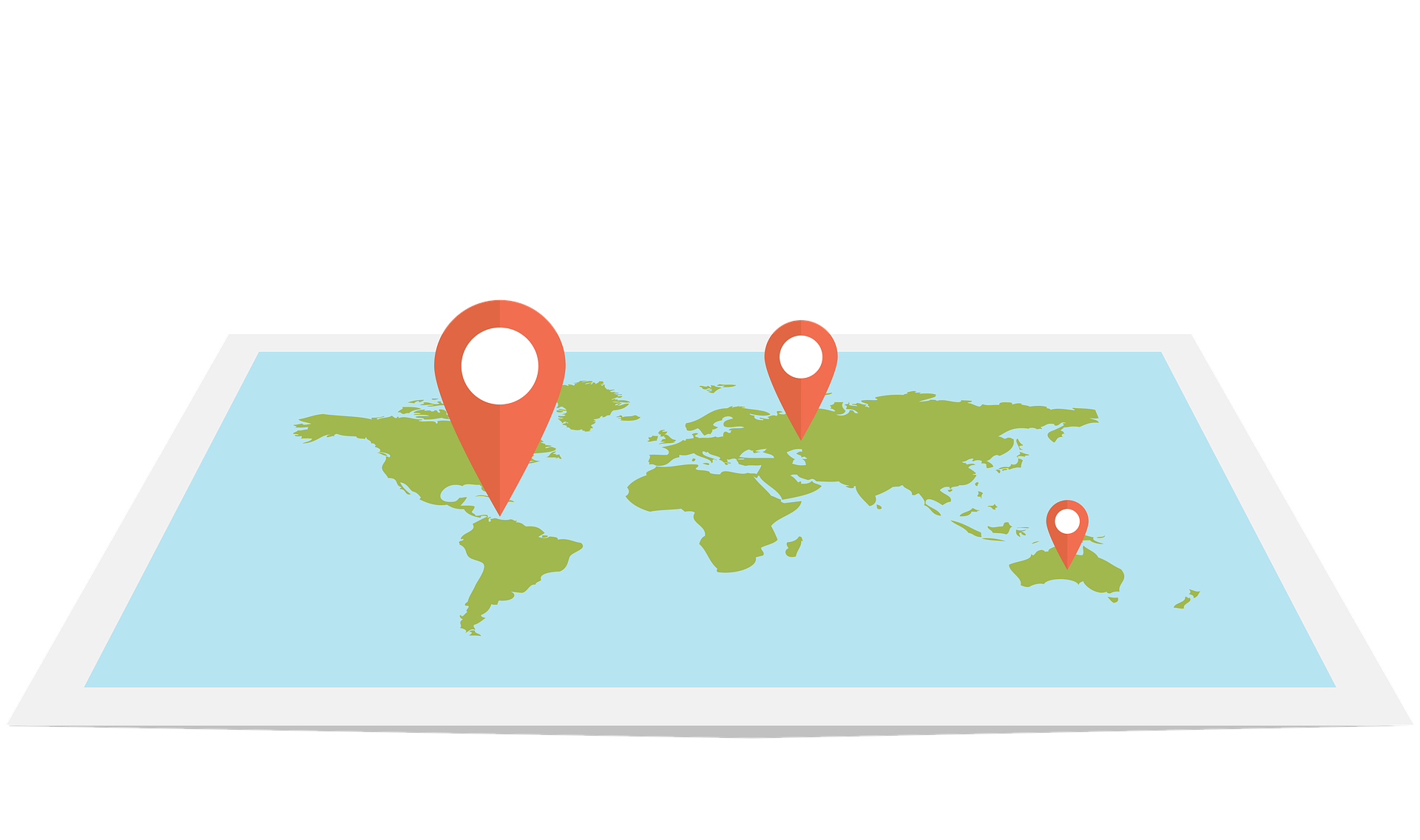 In a recent article, Johns Hopkins presents its newly developed tool, the Lyme and Tickborne Disease (TBD) Dashboard which tracks tickborne diseases at a global scale and displays maps and spatial data sets utilizing unique geographic context and  includes a search function to find out what the incidence is in your US county.

The dashboard was primarily designed for researchers. However, this tool is both accessible and useful for use in the public health sector, policymakers, advocacy groups, and the general public.

The article describes how this novel tool can be used to raise awareness of TBDs and encourage both research and collaboration in science representing a One Health approach. Authors describe the experience of Johns Hopkins developers in designing and implementing the dashboard modeled after their COVID-19 dashboard and the main features of the Lyme & TBD dashboard. The article also presents discussion of the current limitations and future directions of this tool.

Study Indicates Shrews as a Reservoir for Powassan Virus

Heidi K. Goethert, et al., published, “Incrimination of shrews as a reservoir for Powassan virus,” in Communications Biology. The study examines Powassan virus lineage 2 (deer tick virus), and the growing threat the pathogen poses to American public health. Powassan virus is known to cause severe neurologic disease although its life cycle in nature is poorly understood.

Of 20 virus-infected black-legged ticks, 65% fed on shrews and none fed on mice. This percentage of ticks feeding on shrews was clearly associated with the incidence of the deer tick virus infection, although not the Lyme disease agent. One shrew had viral DNA in its brain.

Based on the findings, the research team proposed that shrews are a probable reservoir host for deer tick virus and that evaluation of host blood meals can provide clear evidence to implicate reservoir hosts, thus providing a better understanding of the ecology of tick-borne infections.

Read the study in Communications Biology.

Borrelia miyamotoi in the US

In a recent article published by the Centers for Disease Control (CDC), authors detected Borrelia miyamotoi in ticks from 19 states in the US. Investigators tested 39,198 ticks for B. miyamotoi that were submitted to the public tick testing program at the University of Massachusetts during May 2013–December 2019. All ticks tested were found on humans. 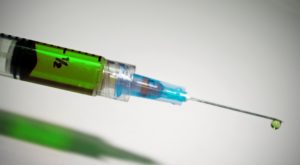