Since 2016, the Congressionally Directed Medical Research Programs (CDMRP) Tick-Borne Disease Research Program (TBDRP) has received a $5 million Congressional appropriation each year to allocate to awardees focused on Lyme disease research or research on other tick-borne disease (TBDs). Awards address at least one of four TBDRP focus areas which include diagnosis, treatment, prevention, and pathogenesis. The projects awarded are focused on lessening the burden of TBDs, to improve treatment options and diagnostic assays, or to investigate the pathogenic mechanisms of the causative agents of TBDs.

LDA President, Pat Smith, is on the CDMRP Programmatic Panel.

For a full description of the awards and projects please visit CDMRP articles here:

On November 20, 2018, the HHS Office of the Chief Technology Officer, CTO, announced a Lyme Innovation initiative which aims to accelerate innovation in the prevention, diagnosis and treatment of tick-borne diseases through the development of next-gen technologies, interdisciplinary collaborations, and data-driven innovations for tick-borne diseases. LDA President Pat Smith was invited participant by HHS at the first Lyme Innovation DC meeting on December 4, 2018. The meeting brought together 80 individuals from diverse groups to help government solve the problems associated with Lyme disease.

The Center for Open Data Enterprise published a report on the meeting with highlights, recommendations, and actions to take. Read the report below.

NOTE from Lyme Disease Association: Please do not contact us for information. Contact the CDMRP TBDRP. Thank you!

The National Institutes of Health put out a request for information in February 2019 for stakeholders to submit specific comments that were to be submitted through an online form.  The NIH is developing a strategic plan to advance tick-borne disease (TBD) research and development over the next five years and beyond.

The Lyme Disease Association, Inc. submitted the following letter in response to the request. No comments will be made back to the responders. NIH encouraged organizations (e.g., patient advocacy groups, professional organizations) to submit a single response reflective of the views of the organization/membership as a whole when possible.

The Tick-Borne Disease Working Group under HHS in Washington, DC, submitted a report to Congress in November of 2018 that made the following recommendation: 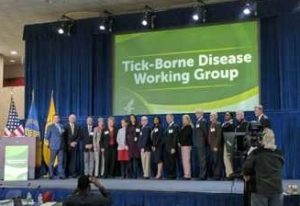 The Pain Management Best Practices Inter-Agency Task Force (Task Force) was established to propose updates to best practices and issue recommendations that address gaps or inconsistencies for managing chronic and acute pain. The U.S. Department of Health and Human Services is overseeing this effort with the U.S. Department of Veterans Affairs and U.S. Department of Defense. The Draft Report from the Task Force on Pain Management Best Practices: Updates, Gaps, Inconsistencies, and Recommendations was issued on December 28, 2018, which calls for individualized, patient-centered pain management to improve the lives of millions of individuals who experience acute and chronic pain.

Members of the public are requested to provide comments on the draft report’s proposed recommendations by April 1, 2019. For more information about the Task Force, the report and the comment process please visit the Pain Management Best Practices Inter-Agency Task Force here.

NOTE: Please do not contact the Lyme Disease Association for information on this posting.

The CDC released a series of articles and papers on the new tick Haemaphysalis longicornis (Hl), also known as the Asian longhorned tick, which has already spread to 8 other states after being discovered in NJ in 2017. Read about a call to action for vector-borne disease prevention and control to include a national strategy.

What you need to know about Asian longhorned ticks—a new tick in the United States.
Click here: https://www.cdc.gov/ticks/pdfs/AsianLonghornedTick-P.pdf

Combatting the Increasing Threat of Vector-Borne Disease in the United States with a National Vector-Borne Disease Prevention and Control System, The American Society of Tropical Medicine and Hygiene.
Authors: Lyle R. Petersen, Charles B. Beard and Susanna N. Visser.
A call for action for vector-borne disease prevention and control, in light of emergence of Hl as the latest public health threat.
Click here: https://www.ajtmh.org/content/journals/10.4269/ajtmh.18-0841