There is a controversy surrounding Lyme disease which has prevented many people from being diagnosed with the disease and from being treated appropriately for the disease. The essence of the controversy is persistence of infection versus autoimmunity
One viewpoint espouses that Lyme disease is hard to catch and easy to cure. Its proponents promote short-term antibiotic treatment regimens (a few weeks) that often are not effective for those who have been diagnosed with Lyme disease. The patients sometimes remain symptomatic after that course of treatment. When that happens with other diseases, patients are often given longer courses of antibiotics. However, those holding this viewpoint, including the IDSA (Infectious Diseases Society of America) and insurance companies, have proceeded to take strong actions to prevent Lyme patients from receiving any more antibiotics. Their claim is any remaining symptoms are “autoimmune” in nature, not persistent infection.
The other viewpoint is held by physicians who are treating chronic Lyme patients. They recognize that scientific research shows that even after longer term treatment (more than the few weeks) with antibiotics, some of the Lyme bacteria can survive (persistent infection). They also recognize that although some symptoms can be the result of an autoimmune cascade, that cascade is driven by a small amount of bacteria that remain after treatment. These treating physicians have found that repeated courses of antibiotics and combinations of antibiotics (which attack in different ways) often help patients to become self sufficient and regain functionality in society.
An argument used against long-term treatment is that prolonged antibiotic use develops resistant bacteria. That claim has not been proven. In fact, antibiotic resistance generally develops as a result of improper usage of the antibiotic–not taking enough, thus the admonition to patients to “take all of your antibiotics that are prescribed, do not stop taking them when you feel better.”
Most treating physicians, patients, advocates and many others feel vested interests control Lyme disease and set the limits for what the disease is, how it can be treated, how it can be tested for, and what science can be published on Lyme disease.
This section presents some of the issues, positions, and players in the controversy. 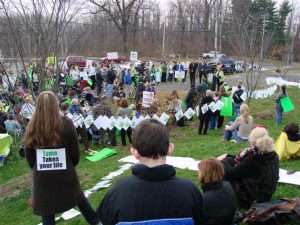 SPECIAL REPORT: LDA MEETS WITH FDA ON LYMERIX On January 22, 2002 in Bethesda, MD., the LDA was able to get a private meeting with the FDA on the vaccine issue, despite reluctance by the FDA to grant the meeting. Congressman Chris Smith helped facilitate the setup of this meeting. Patricia Smith, President, Lyme Disease […]

END_OF_DOCUMENT_TOKEN_TO_BE_REPLACED

VACCINE POSITION PAPER * (There are currently no human vacciens on the market in the US. This applied to the vaccine LymeRix which was withdrawn by the manufacturer citing poor sales). The Association recognizes the need for a safe effective vaccine against Lyme Disease.  Several pharmaceutical companies have developed vaccines that are going through the […]