The Lyme Disease Association, Inc. (LDA) has provided in-service training to NJ school districts since 1992. The LDA has been a registered Professional Development Provider for the State of NJ since the year 2000, providing development in the area of Lyme and other tick-borne diseases. LDA has a number of resource people who help develop the material which LDA uses and distributes. All materials and presentations are free.

LDA (when it was LDANJ) helped to develop and pass the law which developed a state adopted curriculum for use in NJ schools and requires NJ school districts to annually in-service any staff member who has a student with Lyme disease.

LDA has also provided training to a number of other state school districts.

The Lyme Disease Association of New Jersey, now LDA, was successful in 1992 in having the following laws adopted in New Jersey.

18A:35-5.2. Availability of guidelines
2. The commissioner shall make the curriculum guidelines available to all school districts in the State and shall encourage their adoption by those districts which are located in areas of the State which have a high incidence of Lyme Disease.

Vacancies in the membership of the council shall be filled in the same manner as the original appointments are made and a member may be eligible for reappointment. Vacancies occurring other than by expiration of a term shall be filled for the unexpired term.

The members of the council shall serve without compensation but shall be reimbursed for traveling and other miscellaneous expenses necessary to perform their duties, within the limits of funds appropriated or otherwise made available to the council for its purposes. L.1991,c.277,s.2.

The 2016 Ocean County NJ Master Gardner’s Annual Tick Report is a compilation of data on ticks collected from Ocean County, NJ residents who bring in ticks they find to be identified by the Ocean County Rutgers Cooperative Extension Agency in Toms River, NJ. It is printed with permission. 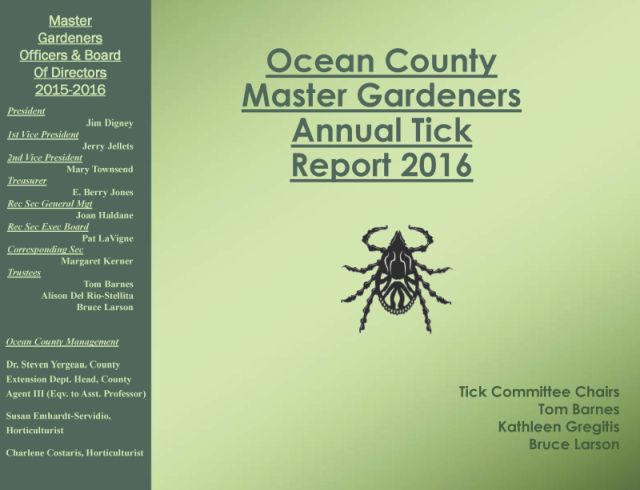 The Lyme Disease Association of New Jersey, now LDA, was successful in having the following law adopted in New Jersey: 1991 A4223 An act establishing a governor’s Lyme disease advisory council. Law PL 1991 Chapter 27

Vacancies in the membership of the council shall be filled in the same manner as the original appointments are made and a member may be eligible for reappointment. Vacancies occurring other than by expiration of a term shall be filled for the unexpired term.

The members of the council shall serve without compensation but shall be reimbursed for traveling and other miscellaneous expenses necessary to perform their duties, within the limits of funds appropriated or otherwise made available to the council for its purposes. L.1991,c.277,s.2.

Bill: HB 1537
Name: An act relative to testing for Lyme disease
Status: Voted Inexpedient to legislate in committee
Purpose: Requires health care providers to provide to patient getting Lyme test a written notice about Lyme, about testing, and the need for the patient to contact provider if symptoms continue. 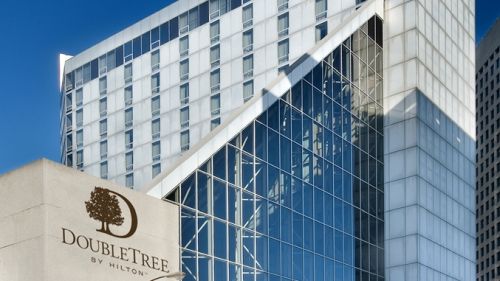 The conference features very current research that could alter the field. Saturday’s Keynote speaker, Dr. Robert Moir from Harvard will present his breaking in vitro results on Beta Amyloid, Alzheimer’s and Lyme Disease. This will be followed by a talk by Dr. Judith Miklossy, International Alzheimer Research Center, reviewing evidence suggesting a link between spirochetal infection and Alzheimer’s Disease. The newest breakthrough in the combination of novel biotechnologies (proteomics and nanotechnology) for improved Lyme diagnostics has led to the nanotrap; results from an initial study will be presented by Dr. Alessandra Luchini from George Mason University. A new species of Borrelia was recently discovered to cause Lyme in the US; this will be discussed by Dr. Bobbi Pritt from the Mayo Clinic. Dr. Ying Zhang from Johns Hopkins will discuss new in vitro antimicrobial strategies to eradicate “Borrelia persisters”, that offer promise for more effective interventions for human Lyme disease. Dr. John Aucott from Johns Hopkins Medical Center will present new findings regarding the human immune response in Lyme disease.

In the area of prevention, the latest on a novel mouse vaccine will be discussed by Dr. Steve Zatechka, US BIOLOGIC. Work so new it is generating discussions from scientists around the world on the impact it might have on ecology in general will be presented by Dr. Kevin Esvelt, from MIT Sculpting Evolution Lab, his talk will address Community-Guided Ecological Immunization to Prevent Tick-Borne Disease using CRISPR technology.

Other talks will discuss diagnosing neurologic Lyme disease by Dr. Patricia Coyle, Stony Brook; acute and chronic neuropsychiatric disease by Dr. Brian Fallon, Columbia; a cardiac Lyme case by Dr. Betty Maloney, Partnership for Tick-Borne Diseases Education, a Lyme CME Provider; a review of clinical trials of Lyme Disease by Internist/epidemiologist Dr. Daniel Cameron; isolation of spirochetes from patients in the Southern U.S. by Dr. Kerry Clark, University of N. Florida; diagnosis and treatment of pediatric Lyme arthritis by Dr. Lise Nigrovic, Boston Children’s Hospital; controlling the inflammatory response in the mouse model of Lyme arthritis by Southern Research Institute’s Dr. Timothy Sellati; studies of viruses in ticks by Dr. Rafal Tokarz of Columbia University; clinical review of other TBDs such as Tularemia by Nantucket clinician Dr.Timothy Lepore, Bartonella by Dr. Marna Ericson of University of Minnesota, and Babesia in the blood supply by Dr. Evan Bloch of Johns Hopkins. Finally, the conference will conclude with a public health talk on the spread of Lyme disease vector into the United States by the CDC’s Dr. Ben Beard.

Below is a letter from Congressman Collin C. Peterson (Minnesota’s 7th Congressional District) thanking the LDA for inviting him to the LDA/Columbia Scientific conference this year (2016).

Listen to radio show “Lyme Disease in Minnesota” on Access Minnesota. Dr. Elizabeth Maloney discusses the symptoms and dangers of Lyme disease and how best to prevent infection. Dr. Maloney mentions the LDA and the upcoming LDA/Columbia Scientific Conference on the show.

Dr. Elizabeth Maloney is a Family Practice Physician and the President of the Partnership for Tick-Borne Diseases Education.

Access Minnesota is a 30-minute public affairs program that airs weekly on radio and monthly on TV. Each episode focuses on the issues, people and stories that impact the state.