Acclaimed Literati with Lyme Authors Amy Tan, Meg Cabot, and Jordan Fisher Smith are part of LDA’s Literati with Lyme team. Literati with Lyme is an effort by nationally-known authors, publishers, editors, literary agents, other publishing professionals, and the national non-profit Lyme Disease Association to raise awareness of this growing infectious disease threat and to raise research funds for a cure.

On May 18, 2005, Amy Tan, Meg Cabot, and Jordan Fisher Smith joined in an LDA Literati Press Conference along with LDA President Pat Smith and Dr. Brian Fallon, Columbia University at the Princeton/Columbia Faculty Club in Manhattan.

On May 19, 2005, the Lyme Disease Association (LDA) hosted Literati with Lyme, a fundraising event at New York University, entitled “Writer’s Block of the Worst Kind.”  The event featured Literati who have all had Lyme disease: Amy Tan (The Joy Luck Club and movie); Meg Cabot (The Princess Diaries series and movies); E Jean Carroll (advice columnist for Elle Magazine); Jordan Fisher Smith (Nature Noir: A Park Ranger’s Patrol in the Sierra); and Jennifer Weis (executive editor St. Martin’s Press). They shared the stage with two prominent medical authorities on Lyme providing a firsthand account of the disease and its impact on peoples’ lives and livelihoods.

In 2007, author Rebecca Wells, Ya Ya Sisterhood, joined the Literati effort, providing a video for the opening of the Columbia University Research Center. 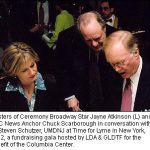 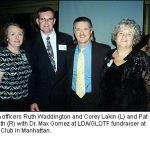 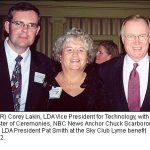 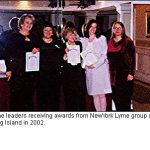 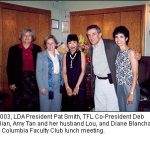 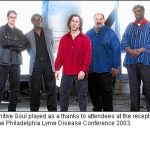 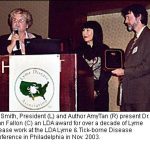 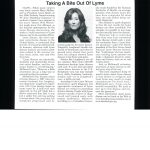 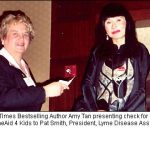 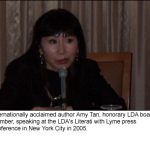 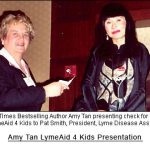