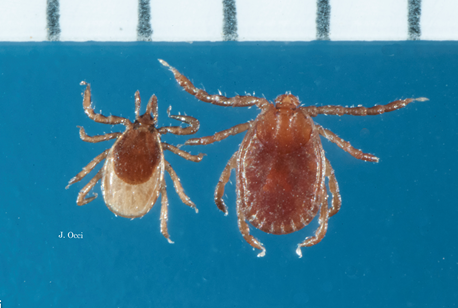 Nymphs scapularis on left, longicornis on right. Thanks to J. Occi, RutgersThe Lyme Disease Association reports that on April 17, 2018, a new tick species to the U.S. has been confirmed by the U.S. Department of Agriculture’s National Veterinary Services Laboratory (NVSL) to have wintered over in NJ, and it may now be an established species. Haemaphysalis longicornis, aka longhorned or bush tick, was confirmed in Hunterdon County, NJ, on November 9, 2017 and a mystery still surrounds its appearance. Initial ID was done by Rutgers University Center for Vector Biology and Hunterdon Co. Department of Health. The animals and property on which the ticks were found were treated to eliminate the tick last year, but the effort was apparently unsuccessful. Wildlife surveillance in the area is continuing to determine if the ticks have spread beyond that area. This tick from East Asia is a serious problem for livestock, particularly in New Zealand, as well as to pets and humans. The tick is dark brown and grows to pea size when fully engorged.

According to James L. Occi, PhD (in progress), Center for Vector Biology, Department of Entomology, Rutgers, also a Scientific Advisory Board Member for the Lyme Disease Association, Inc., dragging for the ticks was not successful so they used CO2 traps to lure the ticks. Problematic is that “the scientists with the most experience with this tick are in parts of Asia, Australia, and New Zealand.”

In other parts of the world, this tick has been associated with several human diseases including spotted fever rickettsiosis. The NJ Department of Agriculture indicates it has had the ticks tested, and so far, the tests have not shown any tick-borne diseases. The tick in Asia is known to reproduce by parthenogenetic reproduction, meaning the tick can come from an unfertilized egg. Nymphs of the longhorned tick are small like the nymph of the deer tick.