These pictures of the Haemaphysalis longicornis (Asian longhorned) were taken recently by LDA’s Scientific & Professional Advisory Board member James L. Occi, Rutgers, in Bergen County NJ. The invasive tick was first discovered on a NJ farm on a sheep in 2017. The tick probably came from Asia, where it is able to transmit diseases to cattle, other animals, and to humans and is now found in 12 states. One of the greatest concerns is about its parthenogenetic ability, the female reproduces without the male. This enables the tick to quickly become an established species in an area. It has already killed cattle in a couple states where more than a thousand ticks were found on each of the deceased animals. 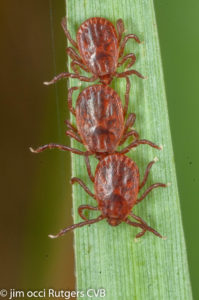 To date, the Asian longhorned tick has been found in the laboratory to be able to acquire and transmit Rickettsia rickettsii, the agent of Rocky Mountain spotted fever (RMSF) and was also found to be able to transmit R. rickettsii through the ova (Stanley et al, 2020).* The Asian longhorned tick has not been found to transmit to humans outside the lab at this time in North America.

However, we need to be cautious, since until several years ago, the government indicated that brown dog ticks only fed upon dogs, not people. Therefore humans did not have to worry about getting RMSF from a brown dog tick. Now we know that human transmission is happening from the brown dog tick, since we know they are biting humans, especially in the Southwest.