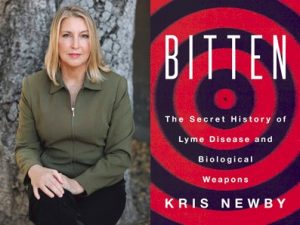 The debate over the prevalence of Lyme disease and whether it exists in a chronic form has raged for decades. Kris Newby’s well researched book provides documented evidence that the suspicions of disease sufferers, their advocates, and treating physicians deserve investigation. The properties of the pathogen itself and its ally, the tick, appear to be part of our nation’s biowarfare studies.

Swiss American scientist Willy Burgdorfer is acclaimed for identifying the spirochetal bacteria which causes Lyme disease. Indeed, the pathogen bears his name, Borrelia burgdorferi. Yet as the author discloses through filmed interviews and archival reviews, there were other aspects to Willy’s research. Employed by the US government and headquartered at Rocky Mountain Laboratories, Burgdorfer was enmeshed in biological warfare projects.  Ms. Newby discusses his work in Switzerland for the American government which led to the identification of a new strain of Ricketttsia, a pathogen if crossed with Borrelia might well complicate treatment and thus be a candidate for biowarfare.  Interviews by Ms. Newby with American researchers on the topic of the Rickettsia, dubbed the Swiss agent by Dr. Burgdorfer, did not shed any light on the mystery pathogen whose existence seems to be buried in the past.

Ms. Newby’s discovery of tick drops and the experimental release of ticks document ongoing biowarfare research and questions the consequences if studies go awry. The prevalence of new diseases and the expansion of tick territories are examined in the context of now revealed government studies.

Ultimately, whatever mix of causes is responsible for the Lyme and other tick-borne diseases epidemic in the US, the solutions, as strongly stated by Kris Newby, lie with better science, advanced research and proper funding.

Click here for YouTube video of Under Our Skin, Director, Andy Abrams and Kris Newby discussing her new book.

Click here for other purchasing options of Bitten on HarperCollins.com