The LDA is concerned not only with the nationwide spread of Lyme disease but also the spread worldwide. LDA has scoured the internet for material related to Lyme throughout the world─peer review literature, official confirmation, researcher/doctor information, traveler advisories, other material. Below is a list of countries in which information seems to support the occurrence of Lyme disease. Countries named are not necessarily endemic for Lyme.

The countries marked with a + are those where there is evidence of Lyme disease such as infected ticks, infected animals, seropositive human samples, or small numbers of diagnosed cases, but where officials are still reluctant to declare Lyme disease present.

The LDA provides this information as a starting point for those who want to determine if Lyme disease exists in a particular country. It is not meant to be a scientific declaration of the presence or absence of Lyme. The LDA did not check all countries worldwide nor did it contact country officials for verification. NOTE: Country names may vary with different sources and disease standards may vary in countries.

The Subantarctic is a region in the southern hemisphere just north of the Antarctic Circle which contains the Campbell Islands and îles Crozet. According to the “Encyclopedia of the Antarctic Vol.1” (ed: B. Riffenburg, 2007 p.335), “The zoonosis Lyme disease is caused by the spirochaete Borrelia burgdorferi, which is carried by sea birds transmitted by Ixodes ticks. It has been found through DNA analysis in ticks on the Campbell Islands and the îles Crozet. King penguins on the îles Crozet have antibodies to B. burgdorferi.” 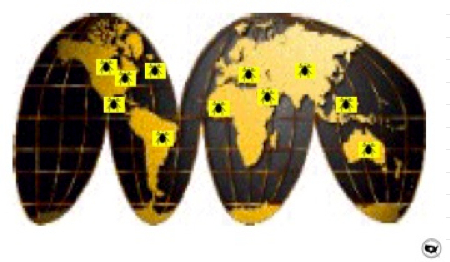 Lyme disease can now be found throughout the world. This map shows some of the regions worldwide where Lyme can be found. The data of where the disease is found was compiled from various internet sources and placed on the map in general areas by LDA to give individuals an idea of the extent of the spread of Lyme disease. Individuals should research specific countries to get definitive locations.

Click here for pdf of details of these concerns.