The Centers for Disease Control & Prevention (CDC) has just released the 2018 final Lyme disease reported cases numbers. Total US reported cases was 33,666 ─ CDC has reported that only 10% of cases are actually reported─ that translates into 336,660 actual new Lyme cases in the US in 2018.

Lyme Disease Association, Inc. (LDA) has ranked the top 15 states based on those CDC reported Lyme case numbers below. 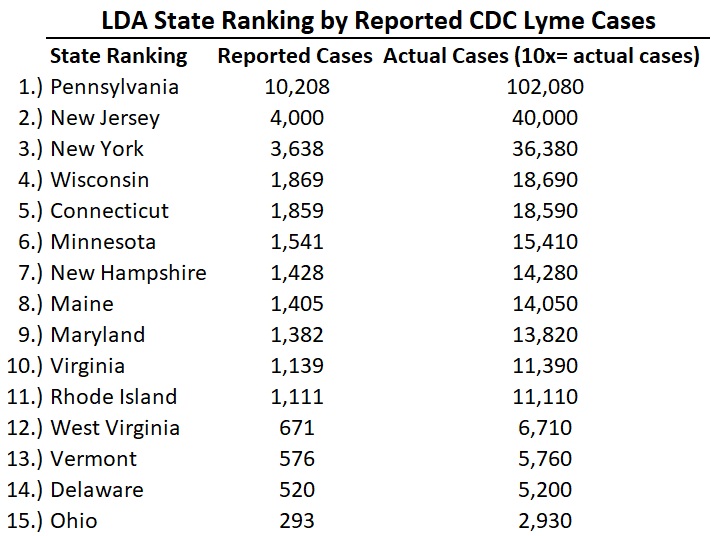 *In recent years, an increasing number of NY Counties have used estimating to determine Lyme case numbers. The Council of State & Territorial Epidemiologists, in charge of surveillance, doesn’t permit estimation to be reported by CDC in the national counts. In 2018, NY State reported it had 7,320 Lyme cases including those 30 estimated county numbers. CDC reported 3,638 Lyme cases for NY State, which excluded the 30 counties’ estimated numbers.
https://www.health.ny.gov/statistics/diseases/communicable/2018/docs/cases.pdf

Note: In 2016, MA changed reporting requirements and very few MA cases are now able to be included in the CDC reported Lyme cases (in 2018 CDC reported 16 cases in Massachusetts)